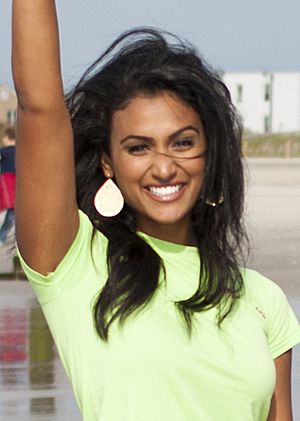 Nina Davuluri (born April 20, 1989) is the Miss America for 2014. She is the first Indian-American to become a Miss America and to be Miss New York. Shortly after the crowning, Davuluri went through some controversy and backlash generated by social media. Davaluri was born in Syracuse, New York.

All content from Kiddle encyclopedia articles (including the article images and facts) can be freely used under Attribution-ShareAlike license, unless stated otherwise. Cite this article:
Nina Davuluri Facts for Kids. Kiddle Encyclopedia.