Lafayette (formerly, La Fayette) is a city in Contra Costa County, California, United States. As of 2011, the city's population was estimated to be 24,285. It was named after the Marquis de La Fayette, a French military hero of the American Revolutionary War. Today Lafayette is known for its pastoral rolling hills and wealthy inhabitants. In 2009, estimated median household income in Lafayette was over $120,000, more than double the statewide average and nearly triple the national average.

Before the colonization of the region by Spain, Lafayette and its vicinity were inhabited by the Saclan tribe of the indigenous Bay Miwok. Ohlone also populated some of the areas along Lafayette Creek. The indigenous inhabitants' first contact with Europeans was in the late 18th century with the founding of Catholic missions in the region. These initial contacts developed into conflict, with years of armed struggle, including a battle on what is currently Lafayette soil in 1797 between the Saclan and the Spanish, and eventually resulting in the subjugation of the native population.

Most of what is currently Lafayette was given as a Mexican land grant, Rancho Acalanes to Candelario Valencia in 1834. The name Acalanes seems to have come from the name of a native village in the area, Ahala-n.

American settlement started with the arrival of Elam Brown from St. Joseph, Missouri in 1846. He purchased Rancho Acalanes in 1848. The settlement continued to steadily grow due to its proximity to San Francisco; starting with Brown's group of 18 settlers, by the census in 1852, 76 people were listed as living in the area. Brown founded a mill in 1853. A school began in 1852 in a one-room schoolhouse, taught by a 25-year-old Kentucky migrant, Benjamin Shreve. By 1865 the school had expanded to 43 students in five classes, and so in 1868 a tax levy of $1,000 was used to build a new schoolhouse; school expanded from a five-month year to a nine-month year. In 1893, a new schoolhouse was built to accommodate the increasing number of students; this building still stands today.

On March 2, 1857 the LaFayette post office was established by the U.S. Postal Service. (The official document giving this exact date was supplied to the Lafayette Historical Society in 1993 by the Historical Division of the U.S. Postal Service.) Prior to 1857 the community that is now known as "Lafayette" actually had no known name - though there are undocumented rumors that it was called Dog Town, Brown's Corner, Brown's Mill, Acalanus, and perhaps Centerville.

The name "LaFayette" came together with the community's first post office. In 1857 Benjamin Shreve, owner and manager of a roadside hotel-general store (which faced today's Lafayette Plaza), applied for a post office for the community, first requesting the name Centerville. When informed that a post office with that name already existed in California, Shreve suggested La Fayette, after the French general who became a hero of the American Revolution (probably not because his wife was a native of Lafayette, Indiana). The first LaFayette post office was established at 3535 Plaza Way and Shreve became the town's first permanent postmaster, holding the job for 30 years.

Spelling: On the original document from the U.S. Postal Service, dated 2 March 1857, the name “LaFayette” is unmistakably written as one word with a capital “F” in the middle. In 1864 the place name "Lafayette" first appeared on a map of the area, titled "Bancroft's Map of California, Nevada, Utah and Arizona (copyrighted 1863. Scale: 24 miles to 1 inch). Yet research by Ruth Dyer, Lafayette historian, shows that the name of the post office and of the new town itself soon began to be written as two words, “La Fayette.” By 1890 it had changed to one word, "Lafayette," and so appeared in an official communication from the U.S. "Post Office Department" in Feb. 1899. Then by 1905 it was back to two words. Finally on 31 March 1932 the name of the post office was officially changed to Lafayette, which has remained unchanged to this day. Lafayette was the tenth post office established in Contra Costa County. (See Salley, History of California Post Offices).

In the early 1860s, Lafayette was briefly the site of a station for the Pony Express.

During the mid-1900s, Lafayette was transformed from an agricultural village into a commuter town, and was incorporated in 1968. 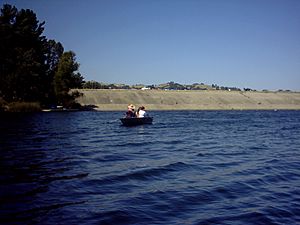 The city is part of the greater San Francisco Bay Area and has its own station on the BART public transit system. Lafayette is situated between Walnut Creek, Moraga, and Orinda, and, together with the latter two towns, is considered locally as part of "Lamorinda".

Lafayette is separated from greater Berkeley and Oakland by the Berkeley Hills (and the Caldecott Tunnel running beneath), a geographical boundary within the East Bay which also represents interesting meteorological, cultural, and political distinctions. Like the rest of the San Francisco Bay Area, Lafayette has a Mediterranean climate (Köppen climate classification Csa); however, the climate differences can be striking: during the summer, temperatures can soar beyond 100 °F (38 °C) in Lafayette and its neighboring cities while the areas west of the hills and nearer to the bay remain up to 20 degrees cooler. Summers are warm, dry and very sunny (although mornings can be foggy); winters are cool and damp, with occasional freezes. Most of the annual rainfall comes in the winter, although there are still plenty of clear days during that time. The record high temperature is 115 °F (46 °C), set in July 1972. The record low temperature is 19 °F (−7 °C), set in December 1990. The region directly east of the hills is generally known for its more suburban or rural atmosphere, and features rolling, grassy hills which highlight a more peaceful and domestic aura. In the southwestern part of Lafayette, is the Lafayette Reservoir, and Briones Regional Park extends into the northern part of Lafayette. Lafayette's wildlife communities include mixed woods and oak woodlands.

In 2012, estimated median household income in Lafayette was over $150,000, more than double the statewide average and nearly triple the national average.

There were 9,152 households out of which 36.3% had children under the age of 18 living with them, 64.9% were married couples living together, 6.5% had a female householder with no husband present, and 26.2% were non-families. 20.1% of all households were made up of individuals and 7.1% had someone living alone who was 65 years of age or older. The average household size was 2.60 and the average family size was 3.02.

In November 2006, area residents began placing crosses on a hill overlooking the Lafayette BART station and Highway 24 "to represent and memorialize the American soldiers who have died in the ongoing Iraqi war."

The Lafayette Library and Learning Center of the Contra Costa County Library is located in Lafayette. Oakmont Memorial Park is a cemetery in Lafayette. Oakwood serves as a country club/fitness center for Lamorindans.

All content from Kiddle encyclopedia articles (including the article images and facts) can be freely used under Attribution-ShareAlike license, unless stated otherwise. Cite this article:
Lafayette, California Facts for Kids. Kiddle Encyclopedia.