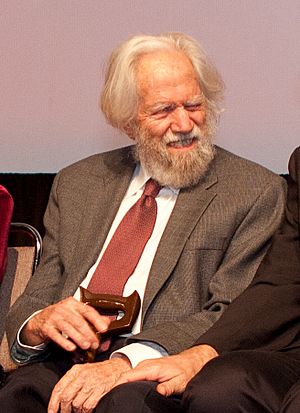 Alexander Theodore "Sasha" Shulgin (June 17, 1925 – June 2, 2014) was an American medicinal chemist, biochemist, pharmacologist, psychopharmacologist, and writer. He is best known for introducing MDMA (an ingredient of "ecstasy") to psychologists in the late 1970s for psychopharmaceutical use.

Shulgin was born in Berkeley, California. He was of Russian origin. His son, Theodore, died from cancer on May 15, 2011. Before he died, he was living on a farm in Lafayette, California.

Shulgin died after a long battle with liver cancer in his home in Lafayette, California on June 2, 2014, aged 88. He was outlived by his wife, Ann Shulgin.

All content from Kiddle encyclopedia articles (including the article images and facts) can be freely used under Attribution-ShareAlike license, unless stated otherwise. Cite this article:
Alexander Shulgin Facts for Kids. Kiddle Encyclopedia.