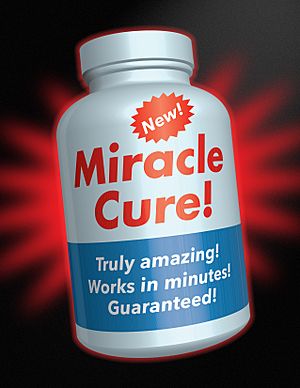 The placebo effect is related to expectations 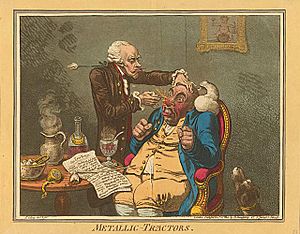 A quack treating a patient with Perkins Patent Tractors by James Gillray, 1801. John Haygarth used this remedy to illustrate the power of the placebo effect.

A placebo is a treatment for a disease or condition which is deliberately ineffective. The motive usually is that if a person believes that a medicine, diet, or other treatment is good for himself or herself, then it is good for the person.

Sometimes sick people who receive a placebo feel like they are getting better, and sometimes their bodies actually do get better. When patients have that response, it is called the "placebo effect". The term placebo effect (or placebo response) was introduced in 1920. It is the response of the subject which causes the observed effect, not the substance,.

John Haygarth tested a placebo effect in the 18th century. It showed "to a degree which has never been suspected, what powerful influence upon diseases is produced by mere imagination".

Émile Coué, a French apothecary (pharmacist), working between 1882 and 1910, discovered what later came to be known as the "Placebo effect". He reassured his clients by praising each remedy's efficiency and leaving a small positive notice with each medication. In 1901 Coué began to study under hypnosis. In 1913, Coué and his wife founded La Société Lorraine de Psychologie appliquée. His book Self-mastery through conscious autosuggestion was published in England (1920) and in the United States (1922).

Placebos can have real effects on patients: that is what "placebo effect" means. Since a landmark paper in 1955 the placebo effect has been recognised and accepted by some, and denied by others. However, there is no doubt that for certain conditions, the placebo effect does exist. Examples are:

All content from Kiddle encyclopedia articles (including the article images and facts) can be freely used under Attribution-ShareAlike license, unless stated otherwise. Cite this article:
Placebo Facts for Kids. Kiddle Encyclopedia.