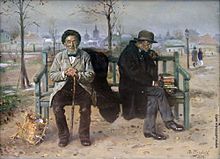 Pessimism is an attitude of mind and a way to look at life. Pessimists believe that generally things are bad, and the world people live in is the worst possible world.

Someone who uses the philosophy is called a pessimist, they are the opposite of an optimist.

An example of pessimism is seeing that a glass of water is "half empty", not "half full".

All content from Kiddle encyclopedia articles (including the article images and facts) can be freely used under Attribution-ShareAlike license, unless stated otherwise. Cite this article:
Pessimism Facts for Kids. Kiddle Encyclopedia.