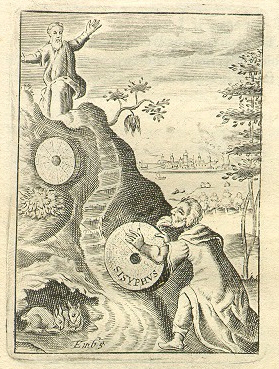 Sisyphus with his stone and the hill. English Engraving, 1792. 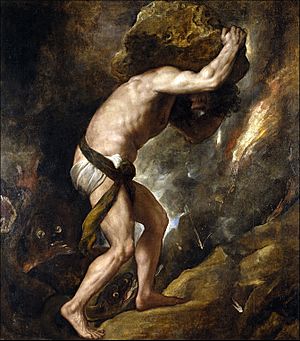 Sisyphus (Σίσυφος, Sísyphos) was a legendary person in Greek mythology.

According to the ancient story, Sisyphus was forced to roll a big rock up a hill, but it rolled back down and the task was never finished. He was forced to repeat this over and over again forever. The word "Sisyphean", which relates to a task which is undertaken with great effort but is ultimately pointless, is derived from the myth.

Sisyphus was the son of King Aeolus of Thessaly and Enarete and the brother of Salmoneus. He married the Pleiad Merope by whom he became the father of Glaucus, Ornytion, Thersander, Almus, Sinon and Porphyrion. Sisyphus was the grandfather of Bellerophon through Glaucus, and Minyas, founder of Orchomenus, through Almus.

Sisyphus was the founder and first king of Ephyra (supposedly the original name of Corinth). King Sisyphus promoted navigation and commerce but was deceitful. He also killed guests to his palace and travellers, a violation of xenia, which fell under Zeus' domain, thus angering the god. He took pleasure in these killings because they allowed him to maintain his iron-fisted rule.

Sisyphus and his brother Salmoneus were known to hate each other, and Sisyphus consulted the oracle of Delphi on just how to kill Salmoneus without incurring any severe consequences for himself. From Homer onward, Sisyphus was famed as the craftiest of men. He made Salmoneus' daughter Tyro in one of his plots to kill Salmoneus, only for Tyro to slay the children she bore him when she discovered that Sisyphus was planning on using them eventually to dethrone her father.

Sisyphus betrayed one of Zeus' secrets by revealing the whereabouts of the Asopid Aegina to her father, the river god Asopus, in return for causing a spring to flow on the Corinthian acropolis.

Zeus then ordered Thanatos to chain Sisyphus in Tartarus. Sisyphus was curious as to why Charon, whose job it was to guide souls to the underworld, had not appeared on this occasion. Sisyphus slyly asked Thanatos to demonstrate how the chains worked. As Thanatos was granting him his wish, Sisyphus seized the opportunity and trapped Thanatos in the chains instead. Once Thanatos was bound by the strong chains, no one died on Earth. This caused an uproar and Ares, annoyed that his battles had lost their fun because his opponents would not die, intervened. The exasperated Ares freed Thanatos and turned Sisyphus over to him.

In another version, Hades was sent to chain Sisyphus and was chained himself. As long as Hades was tied up, nobody could die. Because of this, sacrifices could not be made to the gods, and those that were old and sick were suffering. The gods finally threatened to make life so miserable for Sisyphus that he would wish he were dead. He then had no choice but to release Hades.

Before Sisyphus died, he had told his wife to throw his body into the middle of the public square. This caused Sisyphus to end up on the shores of the river Styx. Then, complaining to Persephone, goddess of the underworld, that this was a sign of his wife's disrespect for him, Sisyphus persuaded her to allow him to return to the upper world. Once back in Ephyra, the spirit of Sisyphus scolded his wife for not burying his body and giving it a proper funeral as a loving wife should. When Sisyphus refused to return to the underworld, he was forcibly dragged back there by Hermes. In another version of the myth, Persephone was tricked by Sisyphus that he had been conducted to Tartarus by mistake, and so she ordered that he be released.

Punishment in the underworld

As a punishment for his trickery, Hades made Sisyphus roll a huge boulder endlessly up a steep hill. The maddening nature of the punishment was reserved for Sisyphus due to his hubristic belief that his cleverness surpassed that of Zeus himself. Hades accordingly displayed his own cleverness by enchanting the boulder into rolling away from Sisyphus before he reached the top, which ended up leaving Sisyphus to an eternity of useless efforts and unending frustration.

All content from Kiddle encyclopedia articles (including the article images and facts) can be freely used under Attribution-ShareAlike license, unless stated otherwise. Cite this article:
Sisyphus Facts for Kids. Kiddle Encyclopedia.