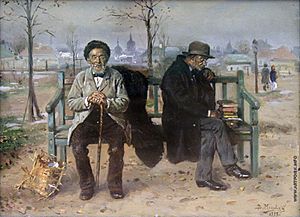 Optimism is a philosophy and a way of life. Optimists believe that the world is generally a positive place to be in. In the view of an optimist, people and things are good. Many liberal optimists do not believe in original sin.

Optimism basically looks on the positive side, believing things will work out in the end.

The opposing theory is called pessimism. Gottfried Leibnitz was a famous optimist. Arthur Schopenhauer is often considered to be a famous pessimist.

Optimism is associated with the idea of a glass looking "half full", instead of looking "Half empty".

All content from Kiddle encyclopedia articles (including the article images and facts) can be freely used under Attribution-ShareAlike license, unless stated otherwise. Cite this article:
Optimism Facts for Kids. Kiddle Encyclopedia.