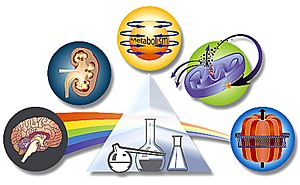 If something can be used as a medicine, it is called a pharmaceutical. Pharmacology includes how drugs are made, how they interact with living organisms, what harmful effects they could have, how they can be used as medicines, and if they can be used to prevent illness. A person who works in the study of pharmacology is called a pharmacologist. Pharmacologists work in a team with biochemists, geneticists, microbiologists, toxicologists and pharmacists to run clinical tests on how drugs work.

The development of drugs is very important to medicine, but it also has strong economical and political uses. To protect people and prevent abuse, some countries try to control the way in which drugs are made, sold, and administered.

To study chemicals, a person needs to know a lot about what will be affected if it is ingested (taken into the body). As more people know about cell biology and biochemistry, the field of pharmacology has changed as well. It is now possible to design chemicals that do specific things.

When a pharmacologist is talking about pharmacokinetic properties of a chemical, they are interested in four things: ADME.

Drugs that are given to people to help cure them of a medical condition or help reduce the symptoms are often licensed. They can be divided into three groups: over-the-counter, where anybody can buy the drug from a shop; prescription-only medicine, where a doctor has to say that a person is allowed to take a drug; and in some countries, pharmacy medicines, where only a registered pharmacy can sell a drug. Most over-the-counter medication will not hurt a person if they take a bit more than they are meant to. Medications are often produced by pharmaceutical companies and are often patented. Drugs that are not patented are called generic drugs.

All content from Kiddle encyclopedia articles (including the article images and facts) can be freely used under Attribution-ShareAlike license, unless stated otherwise. Cite this article:
Pharmacology Facts for Kids. Kiddle Encyclopedia.