Philosophy of mind facts for kids 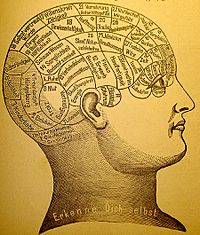 A phrenological mapping of the brain – phrenology was among the first attempts to correlate mental functions with specific parts of the brain although it is now largely discredited.

Philosophy of mind is thinking about how the mind works and goes about in a relationship with everything else in the world. It also concerns consciousness which is researched in psychology and physics, as well.

All content from Kiddle encyclopedia articles (including the article images and facts) can be freely used under Attribution-ShareAlike license, unless stated otherwise. Cite this article:
Philosophy of mind Facts for Kids. Kiddle Encyclopedia.