Anne Celeste Heche (born May 25, 1969) is an American actress and screenwriter. She starred in the television soap opera Another World. She received a Daytime Emmy Award in 1991. She has starred in many theatrical movies. She is best known for her role in Six Days Seven Nights, where she starred opposite Harrison Ford.

As Heche was beginning to establish herself in movies during the late 1990s, her career was negatively affected by her highly publicized same-sex relationship with Ellen DeGeneres. This resulted in Heche losing movie offers. 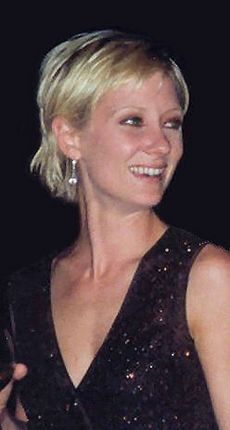 Anne Heche's same-sex relationship with comedienne Ellen DeGeneres and the events following their breakup became subjects of widespread media interest. The couple started dating in 1997. At one point, they said they would get a civil union if it became legal in Vermont. They broke up in August 2000. Heche has said that all of her other relationships have been with men.

Sources say Heche left her husband for Men in Trees co-star James Tupper. The couple reportedly moved in together in August 2007. On December 5, 2008, it was confirmed by Heche's representative that the actress was pregnant with Tupper's child. Their son, Atlas Heche Tupper, was born on March 8, 2009.

Heche is the youngest of five, but her sister Abigail is her only surviving sibling. Her sister Cynthia died of a heart defect in infancy. Her brother Nathan died in a car crash aged 18 in June 1983. Her sister, Susan Bergman, died aged 48 in January 2006. Her father Donald died of AIDS aged 45 in March 1983. Since her husband's death from AIDS, Nancy Heche has been a Christian therapist and motivational speaker.

All content from Kiddle encyclopedia articles (including the article images and facts) can be freely used under Attribution-ShareAlike license, unless stated otherwise. Cite this article:
Anne Heche Facts for Kids. Kiddle Encyclopedia.