Aurora is a city in Portage County, Ohio, United States. It is co-extant with, and formed from, the former township of Aurora, which was formed from the Connecticut Western Reserve. The population was 15,548 at the 2010 census. It is part of the Akron Metropolitan Statistical Area.

Aurora was designated a Tree City USA by the National Arbor Day Foundation.

Some say Aurora was the name of the daughter of Major Amos Spafford, while others believe the village was named after Aurora, the Roman goddess of dawn.

There were 6,018 households of which 32.9% had children under the age of 18 living with them, 62.5% were married couples living together, 7.1% had a female householder with no husband present, 2.9% had a male householder with no wife present, and 27.5% were non-families. 24.0% of all households were made up of individuals and 12.1% had someone living alone who was 65 years of age or older. The average household size was 2.54 and the average family size was 3.03. 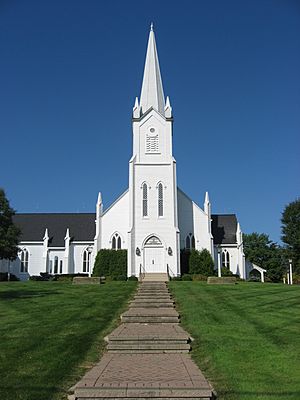 The Church in Aurora, part of Aurora's historic district

Parts of central Aurora have been designated the Aurora Center Historic District. The historic district was listed on the National Register of Historic Places in 1974.

The suburb has a plethora of private country clubs including Club Walden, and Barrington Golf Club. In 1924, Bert Way designed the championship golf course at Aurora Golf and Country Club, located on Trails End. The course winds through 220 acres of spectacularly crafted landscape, with the Chagrin River flowing through a majority of the holes. Aurora Golf and Country Club was constructed in natural rolling terrain, with the Aurora branch of the Chagrin River being a significant feature. In 1967, 1969, and 1970, the club hosted the Cleveland Open. Arnold Palmer once battled the course while competing in this PGA event; Arnold Palmer, along with Bruce Devlin, Charlie Coody, Gary Trivisonno, and Tom Laubacher, still holds the course record of 64.

Various amusement parks and other recreational facilities operated on the site of Giles Pond, also known as Geauga Lake, continuously since before 1887.

Aurora historically was the second location for the SeaWorld chain of marine mammal parks, which opened in 1970 and operated in the Geauga lake area on the northern edge of the city and was home to the killer whale (Orca) known as Shamu. In 2001, the park was purchased by Six Flags, along with adjacent Geauga Lake, and combined to form Six Flags Worlds of Adventure. Cedar Fair purchased the combined property in 2004, and most of the former SeaWorld Ohio park was closed. Cedar Fair then operated the property as a waterpark, Wildwater Kingdom. The water park closed in 2016.

Aurora High School, in 2008, were the Division III State Champions in football.

All content from Kiddle encyclopedia articles (including the article images and facts) can be freely used under Attribution-ShareAlike license, unless stated otherwise. Cite this article:
Aurora, Ohio Facts for Kids. Kiddle Encyclopedia.