The city is named after its founder, David Hudson, who settled there from Goshen, Connecticut in 1799, when it was part of the Connecticut Western Reserve. Hudson was a stop on the Underground Railroad. The Hudson-born Pennsylvania coal mine owner James Ellsworth assisted in the rebuilding of Main Street with a new clock tower after the street had been destroyed by fire in 1903. Ellsworth also refinanced the bankrupt Western Reserve Academy which had been closed from 1903 until 1916.

On November 28, 1973, a large area of the village, "roughly bounded by College, Streetsboro, S. Main, and Baldwin" streets, was listed on the National Register of Historic Places as the Hudson Historic District. The historic district was expanded on October 10, 1989, to also include the area "roughly bounded by Hudson St., Old Orchard Dr., Aurora St., Oviatt St., Streetsboro St., and College St. to Aurora (street)". In addition to the Hudson Historic District, there are several additional properties in Hudson listed on the Register.

From 1837 to 1994, the Village of Hudson and Hudson Township were two separate governing entities. In 1994, voters approved a merger uniting the two to create the City of Hudson. The brick Clock tower near the center of Hudson is a very familiar and also very tall historic place in Hudson.

North Main Street, with the landmark clock tower visible to the right

Howard Hanna and US Bank

Hudson's neighbors are, starting at the northern corporate boundary and proceeding clockwise:

Hudson's surface water flows into five major watersheds. The three most prominent are Brandywine Creek, Mud Brook, and Tinkers Creek. A small part of the western edge of town drains into the Cuyahoga River, and the southeastern corner of the city drains into Fish Creek.

The Hudson Park Board oversees more than one thousand acres (4 km²) of parkland in the city. The most prominent property is Hudson Springs Park, which has a 50-acre lake open to kayaks, canoes and small motorized boats. Boat storage is available to residents only for an annual fee. The lake is stocked with fish and encircled by a walking trail that ventures into the woods that stretch along a large portion of the lake. The park also has a disc golf course, docks, sand volleyball pit and permanent corn-hole boards (bring your own bean bags). Cascade Park, Barlow Farm Park, and Colony Park are large neighborhood parks used for sports and general family recreation. Other properties, such as Doc's Woods, MacLaren Woods, Trumbull Woods, and Bicentennial Woods, are kept as forested nature preserves. The first Hudson Park, Wildlife Woods, is actually located west of the city in the Cuyahoga Valley National Park.

Note: Historical Population figures before 2000 are for the former Village of Hudson only and do not include the former Hudson Township.

There were 7,620 households of which 43.2% had children under the age of 18 living with them, 74.9% were married couples living together, 5.9% had a female householder with no husband present, 1.9% had a male householder with no wife present, and 17.3% were non-families. 15.3% of all households were made up of individuals and 8.4% had someone living alone who was 65 years of age or older. The average household size was 2.87 and the average family size was 3.21.

There were 7,357 households out of which 49.5% had children under the age of 18 living with them, 79.7% were married couples living together, 5.1% had a female householder with no husband present, and 13.7% were non-families. 12.3% of all households were made up of individuals and 6.5% had someone living alone who was 65 years of age or older. The average household size was 3.01 and the average family size was 3.30.

Ohio's State Route 303, State Route 91, and State Route 8 pass through Hudson. Interstate 480 cuts through the extreme northeast corner of the city, and Interstate 80, the Ohio Turnpike, bisects the city from west to east.

Hudson, unlike many surrounding communities, has retained two-lane roadways in much of its downtown. This has helped preserve the open spaces, historical buildings, and trees that the city values. However, this can also significantly lengthen the amount of time commuters spend in the downtown area. There are some services from Metro RTA, and much of Hudson is accessible by foot or bike. 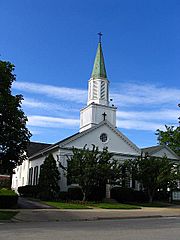 There are many churches and other places of worship in Hudson. There are several Christian denominations present, including the Episcopal Church, United Church of Christ, Lutheran, Christian Science, Presbyterian, United Methodist, Anglican, and Roman Catholic, and non-denominational congregations as well as a Jewish temple.

All content from Kiddle encyclopedia articles (including the article images and facts) can be freely used under Attribution-ShareAlike license, unless stated otherwise. Cite this article:
Hudson, Ohio Facts for Kids. Kiddle Encyclopedia.