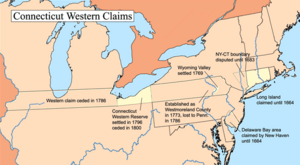 Connecticut's land claims in the West

The Connecticut Western Reserve was a portion of land claimed by the Colony of Connecticut and later by the state of Connecticut in what is now mostly the northeastern region of Ohio. The Reserve had been granted to the Colony under the terms of its charter by King Charles II.

In the 19th century, the Western Reserve "was probably the most intensely antislavery section of the country". 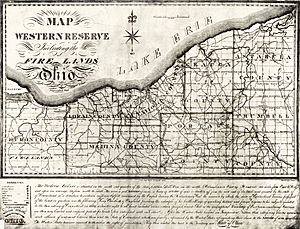 Map of the Western Reserve in 1826

Prior to the arrival of European colonizers, the land surrounding the southern shore of Lake Erie was inhabited by the Erie people. At the close of a war against the Iroquois from 1654–56, the Erie were almost completely decimated. Their towns were destroyed, and any survivors were assimilated into neighboring tribes, mainly the Seneca.

After the American Revolutionary War, Connecticut was forced by the federal government to surrender the Pennsylvania portion (Westmoreland County) of its "sea-to-sea grant" following the Pennamite–Yankee Wars. Nevertheless, the state held fast to its claim on the lands between the 41st and 42nd-and-2-minutes parallels that lay west of the Pennsylvania state border.

The claim within Ohio was for a 120-mile (190 km)-wide strip between Lake Erie and a line just south of present-day Youngstown, Akron, New London, and Willard, about 3 miles (4.8 km) south of present-day U.S. Highway 224. The claim beyond Ohio included parts of Michigan, Indiana, Illinois, Iowa, Nebraska, Wyoming, Utah, Nevada, and California. The eastern boundary of the reserve follows a true meridian along Ellicott's Line, the boundary with Pennsylvania. The western boundary veers more than four degrees from a meridian to maintain the 120-mile width, due to convergence.

Connecticut gave up western land claims following the American Revolutionary War in exchange for federal assumption of its debt, as did several other states. From these concessions, the federal government organized the Northwest Territory (formally known as the "Territory Northwest of the River Ohio"). The deed of cession was issued on September 13, 1786. As population increased in portions of the Northwest Territory, new states were organized and admitted to the Union in the early 19th century.

Connecticut retained 3,366,921 acres (13,625.45 km2) in Ohio, which became known as the "Western Reserve". The state sold the Western Reserve to the Connecticut Land Company in 1796 (or possibly 12 August, 2 September, or 5 September 1795) for $1,200,000. The Land Company were a group of investors who were mostly from Suffield, Connecticut. The initial eight men in the group (or possibly seven or 35) planned to divide the land into homestead plots and sell it to settlers from the east.

But the Indian titles to the Reserve had not been extinguished. Clear title was obtained east of the Cuyahoga River by the Greenville Treaty in 1795 and west of the river in the Treaty of Fort Industry in 1805. The western end of the reserve included the Firelands or "Sufferers' Lands," 500,000 acres (2,000 km2) reserved for residents of several New England towns which had been destroyed by British-set fires during the Revolutionary War.

The next year, the Land Company sent surveyors led by Moses Cleaveland to the Reserve to divide the land into square townships, 5 miles (8.0 km) on each side (25 square miles (65 km2). Cleaveland's team also founded the city of Cleveland along Lake Erie, which became the largest city in the region. (The first "a" was dropped by a printer in the early years of the settlement, as Cleveland takes less space on a printed page than Cleaveland.)

The territory was originally named "New Connecticut" (later discarded in favor of "Western Reserve"), and settlers began to trickle in during the next few years. Youngstown was founded in 1796, Warren in 1798, Hudson in 1799, Ravenna also in 1799, Ashtabula in 1803, and Stow in 1804.

This area of Ohio became a center of resource development and industrialization through the mid-20th century. It was a center of the steel industry, receiving iron ore shipped through the Great Lakes from Minnesota, processing it into steel products, and shipping these products to the east. This industry stimulated the development of great freight lakers, as the steam ships were known, including the first steel ships in the 20th century. Railroads took over some of the freight and commodity transportation from the lake ships. In the late 19th and early 20th centuries, these cities attracted hundreds of thousands of European immigrants and migrants (both black and white) from the rural South to its industrial jobs.

At the request of Congress in 2011, the National Park Service prepared a feasibility study for declaring the 14-county region of the Western Reserve as a National Heritage Area. This is a means to encourage broad-based preservation of such historical sites and buildings that are related to a large historical theme. Such assessment and designation has been significant for recognizing assets, and encouraging new development and businesses, including heritage tourism, often related to adaptive re-use of waterways, and buildings, as well as totally new endeavors. The United States has designated 49 National Heritage Areas, including two in Ohio: the Ohio Canal of the Ohio and Erie Canal and the National Aviation Heritage Area.

The NPS study coordinator said that while the region had the historic assets, and there was considerable public support for such a designation, the Western Reserve lacked "a definitive coordinating entity or supporting group," which is required to gain Congressional approval. If such a body develops in the future, it might seek federal designation as a Heritage Area.

The settlers in northern Ohio repeated the style of structures and the development of towns with which they were familiar in New England; many buildings in the new settlements were designed in the Georgian, Federal, and Greek Revival styles. Towns such as Aurora, Bath, Canfield, Chagrin Falls, Gates Mills, Hudson, Medina, Milan, Norwalk, Oberlin, Painesville, Poland, and Tallmadge exemplify the expression of these styles and traditional New England town planning. For instance, Cleveland's Public Square reflects the traditional New England central town green.

All content from Kiddle encyclopedia articles (including the article images and facts) can be freely used under Attribution-ShareAlike license, unless stated otherwise. Cite this article:
Connecticut Western Reserve Facts for Kids. Kiddle Encyclopedia.