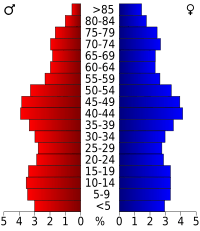 A pyramid showing the age distribution of the county. 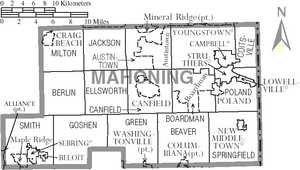 Map of Mahoning County, Ohio with municipal and township labels

The population ranking of the following table is based on the 2010 census of Columbiana County.

According to the county's 2019 Comprehensive Annual Financial Report, the top employers in the county are:

All content from Kiddle encyclopedia articles (including the article images and facts) can be freely used under Attribution-ShareAlike license, unless stated otherwise. Cite this article:
Mahoning County, Ohio Facts for Kids. Kiddle Encyclopedia.