Portage County is a county located in the U.S. state of Ohio. As of the 2020 census, the population was 161,791. Its county seat is Ravenna. The county was created in 1807 and organized in 1808 and is named for the portage between the Cuyahoga and Tuscarawas Rivers.

Portage County is part of the Akron, OH Metropolitan Statistical Area, which is also included in the Cleveland-Akron-Canton, OH Combined Statistical Area. Its largest city is Kent.

The name "Portage" comes from an old Native American path called "Portage Path", which ran between the Cuyahoga and Tuscarawas rivers, where travelers portaged their canoes. The location of the trail today is within the boundaries of neighboring Summit County.

After the discovery of the New World, the land that became Portage County was originally part of the French colony of Canada (New France), which was ceded in 1763 to Great Britain and renamed the Province of Quebec. In the late 18th century the land became part of the Connecticut Western Reserve in the Northwest Territory, then was purchased by the Connecticut Land Company in 1795.

The first European settler in what is now Portage County was Abraham Honey in 1798 in the area now known as Mantua Township, followed by Asa Hall in what is now Atwater Township in April 1799. In June 1799, Benjamin Tappan, Jr. arrived and founded Ravenna, David Daniels came to what is now Palmyra Township, and Ebenezer Sheldon settled in what is now Aurora. 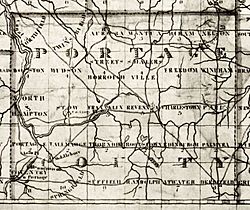 1826 map of Portage County with 30 townships

When first settled, the area that presently constitutes Portage County was part of the original Jefferson County, which had been organized in 1797. In 1800, the area was made part of Trumbull County, which followed the boundaries of the Connecticut Western Reserve. In 1802, all of what is now Portage County was organized under the name of Franklin Township with other townships being formed later. On February 10, 1807 the Ohio state legislature passed the act to create Portage County from Trumbull County and it took effect June 7, 1807. Portage County remained attached to Trumbull County until June 8, 1808, when the first elections were held. Initially, the county included a large area of the Western Reserve that encompassed most of present-day Summit County, all of Medina and Huron counties, and parts of Lorain and Ashland counties. There were six organized townships in 1808: Franklin, Deerfield, Aurora, Hiram, Springfield, and Hudson with new townships organized later, reaching a maximum of 30. The present-day boundaries of Portage County were established in 1840 following the 1812 creation of Medina County, a slight boundary adjustment in 1827 with Cuyahoga County, and finally the creation of Summit County in 1840, which took 10 townships from Portage County along with 3 townships from Medina County and two from Stark County. 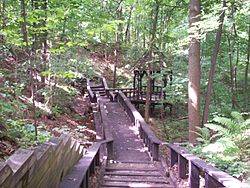 West Branch State Park is a very large state park in central Portage County, consisting of a large green surrounding the Michael J. Kirwan Dam and Reservoir. There are a number of smaller state and local parks. 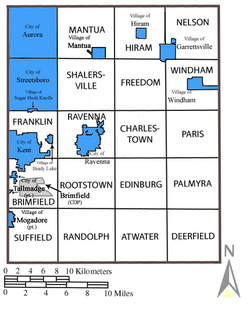 Map of school districts in Portage County with township and municipal boundaries superimposed.

In addition, there are parts of five neighboring districts which serve portions of Portage County residents.

Portage County is home to three institutions of higher learning:

All content from Kiddle encyclopedia articles (including the article images and facts) can be freely used under Attribution-ShareAlike license, unless stated otherwise. Cite this article:
Portage County, Ohio Facts for Kids. Kiddle Encyclopedia.