Tallmadge (often mispronounced) is a city in Summit and Portage counties in Ohio, United States. It is a suburb of Akron and part of the Akron Metropolitan Statistical Area. The population was 17,537 at the 2010 census. Tallmadge was founded in 1807 and is the second-oldest city in Summit County, following Hudson, which was founded in 1799.

Historically, Tallmadge was a part of the Connecticut Western Reserve, which was a three million acre plot of land in northeast Ohio. Prior to being named Tallmadge, it was part of Town 2, Range 10 in the Western Reserve. In 1807, the Reverend David Bacon founded and organized Tallmadge, placing a square road in the center of town where several other roads met, modeled after New England designs of the time period. The town was named after Benjamin Tallmadge, an American Revolutionary War figure and local landowner.

In the nineteenth century, Tallmadge continued to develop around the square as its centerpiece, which years later became a traffic circle named "Tallmadge Circle" (or simply "the Circle"). The Circle as it is today represents New England's role in the settlement of the Ohio Western Reserve. The rest of the city was designed in a grid pattern, with industry tending to develop near the railroad.

No alcohol could be bought or consumed in public in Tallmadge until the early 1990s, when the law was amended to allow the retail sale of alcohol in stores, but public consumption was still illegal. In 2001, the law was repealed and alcohol could be sold and consumed in restaurants, provided that alcohol not account for more than 30% of any establishment's revenue. The first restaurant to offer alcohol in Tallmadge was Delanie's on West Avenue. 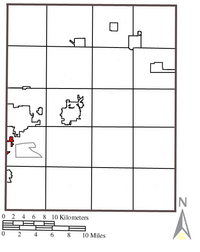 Tallmadge lies within two counties. While the vast majority of the city lies in Summit County, portions on the east side protrude into neighboring Portage County. This phenomenon resulted from the annexation of small portions of a neighboring township, Brimfield.

There were 7,026 households, of which 28.7% had children under age 18 living with them, 55.5% were married couples living together, 10.7% had a female householder with no husband present, 4.0% had a male householder with no wife present, and 29.8% were non-families. 25.5% of all households were made up of individuals and 11.7% had someone living alone who was 65 years of age or older. The average household size was 2.45 and the average family size was 2.94.

There were 6,273 households, of which 32.0% had children under age 18 living with them, 63.0% were married couples living together, 8.9% had a female householder with no husband present, and 24.9% were non-families. 21.3% of all households were made up of individuals and 10.4% had someone living alone who was 65 years of age or older. The average household size was 2.56 and the average family size was 2.99.

At the center of the town is the Historic Tallmadge Church (built in 1825), recognized as a historic place by the Ohio Historical Society, and was featured on the cover of the November 20, 1944, edition of Life magazine. An intersection surrounds the church and a small park, the Tallmadge Circle Park, on which the church sits. The Circle Park is also home to Tallmadge's Old Town Hall (established 1859), which houses a museum on its second floor. In 2003, a new steeple was placed atop the Old Town Hall, replacing the original which had been removed decades earlier.

The Circle itself, which surrounds the Historic Church, Old Town Hall, and Circle Park, continues to be a notable landmark at the center of the town. While two separate Ohio state routes meet at the intersection (SR 91 and SR 261; at one point SR 18 and SR 532 also met there), the one-lane circle regularly accommodates several dozen vehicles at a time without congestion. The eight roads that meet at the Circle form a spoke design (see image, upper right) that, as they lead away from the Circle, travel in the cardinal and ordinal directions. The roads are named according to the respective directions they travel away from the Circle (e.g. Northwest Avenue); these names are not preserved by the neighboring municipalities into which the eight roads run. 4 of these 8 roads comes to a six-point intersection within the original city, forming a square with the 4 corners in the Northeast,Northwest,Southeast and Southwest roads running through them. In summer 2010, one of these six-point intersections in the northeastern portion of Tallmadge was converted to a roundabout based on the design of the original Circle. Out-of-town drivers are sometimes uncomfortable navigating the intersection because it has no stop signs or traffic lights.

All content from Kiddle encyclopedia articles (including the article images and facts) can be freely used under Attribution-ShareAlike license, unless stated otherwise. Cite this article:
Tallmadge, Ohio Facts for Kids. Kiddle Encyclopedia.