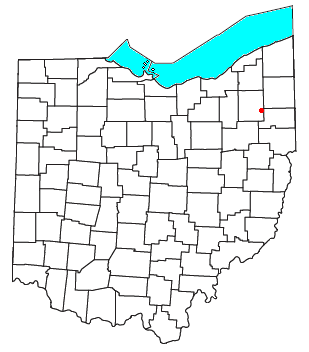 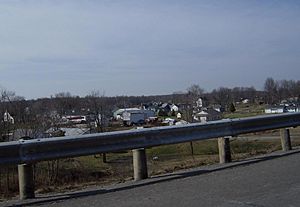 View of parts of Diamond from I-76

Diamond is an unincorporated community in eastern Palmyra Township, Portage County, Ohio, United States. Although it is unincorporated, it has a post office, with the ZIP code of 44412. The community is part of the Akron Metropolitan Statistical Area. Interstate 76 travels near Diamond. The village used to be a stop on the New York Central Railroad, but the stop was abandoned in the early 1970s.

A post office called Diamond has been in operation since 1880. Diamond was originally a coal mining community, and the Black Diamond Coal Company operated there.

All content from Kiddle encyclopedia articles (including the article images and facts) can be freely used under Attribution-ShareAlike license, unless stated otherwise. Cite this article:
Diamond, Ohio Facts for Kids. Kiddle Encyclopedia.