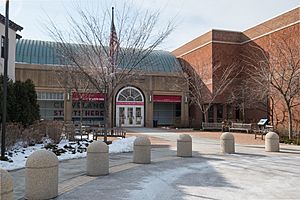 Entrance to the Cleveland History Center 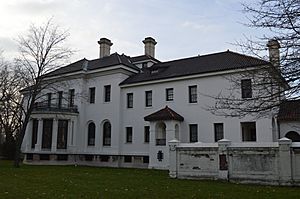 The Hay-McKinney Mansion, part of the Cleveland History Center

The Western Reserve Historical Society (WRHS) is a historical society in Cleveland, Ohio. The society operates the Cleveland History Center, a collection of museums in University Circle.

The society was founded in 1867, making it the oldest cultural institution in Northeast Ohio. WRHS is focused on the history of the Western Reserve. WRHS celebrated its 150th anniversary in 2017.

The Western Reserve & Northern Ohio Historical Society formed in 1867, initially as a branch of the Cleveland Library Association. Its first president was Charles Whittlesey, "a geologist and historian". "Originally, the society was located on the third floor of the Society for Savings Bank in downtown Cleveland." The institution first opened to the public in 1871 and purchased the entire bank building in 1892 due to the increasing size of the collections. From 1898 until 1938 the society resided at E. 107th St. and Euclid Avenue. WRHS moved to its present location in the late 1930s.

Located in University Circle, an arts and culture district of Cleveland, the Society houses and curates collections of cultural artifacts and documents from various people. The mission of the Western Reserve Historical Society is "to inspire people to discover the American experience by exploring the tangible history of Northeast Ohio." This is accomplished by collecting, preserving and presenting the history of all the people of the Western Reserve. WRHS is a private, membership-based society that also receives funding through investments, grants, and gifts.

"Founded in May 1867, the Western Reserve Historical Society is Cleveland's oldest existing cultural institution. It was established as the historical branch of the Cleveland Library Association which dated from 1848. The Society's creation was part of an important trend in the United States, the establishment of private organizations to oversee the collection and preservation of documents and objects relating to various aspects of national, regional and local history. While its original focus was on the history of "...Cleveland and the Western Reserve, and generally what relates to the history of Ohio and the Great West," it now concentrates on the history of Northeast Ohio."

"Between 1867 and 1898, the Society was located in downtown Cleveland in a building which stood on what is now Key Tower, the site of the KeyBank headquarters. During this period the Society's collections grew rapidly as did its means of support as leading citizens, including John D. Rockefeller, collectors, and scholars became associated with its operations. The growth and stature of its collections were such that it obtained a charter from the State of Ohio on March 7, 1892 which made it an independent organization, one on a par with other major cultural and educational institutions that had arisen in the post-Civil War period."

"In 1898 the Society moved to the University Circle area, occupying a large new building that was situated at the southeast corner of the intersection of Euclid Avenue and what is now Stokes Boulevard. It remained there until 1938 when it began a move to its current location on East Boulevard with its acquisition of the Hay-McKinney mansion to house its museum. Today, the Cleveland History Center houses the Research Library, the Crawford Auto Aviation Museum, the Chisholm Halle Costume Wing (home to fashion exhibits), two historic mansions, Kidzibits Family Hands-on Gallery, as well as its administrative offices."

"In 1957, WRHS received the Jonathan Hale homestead in Bath, Ohio and now operates the 90 acres of Hale Farm & Village, a living history museum depicting life in the 19th century through agricultural practices and everyday craft and trade demonstrations such as glassblowing, pottery, spinning and weaving, and more."

"The physical and geographic expansion of the Society's facilities was complemented by increased professionalism of its curatorial operations and an important topical expansion of its collections. Beginning in the late 1960s the Society began aggressive programs to acquire and preserve documents and artifacts that represented the histories of Northeast Ohio's diverse populations. Specific programs were established in African-American, Jewish, Italian, Irish, LGBT, labor, and other areas of community history which have provided it with unparalleled resources relating to urban, industrial, immigration, and family history. These provide a critical complement to its collections on the pioneer settlement and early growth of the Western Reserve as well as to major topics such as the American Civil War, decorative arts, genealogy, and automotive and aviation history."

"By the early 1980s, the Western Reserve Historical Society had become one of the largest private historical societies in the United States. In 1986, its library contained approximately 250,000 books and six million manuscript items."

Located in Bath, Ohio, Hale Farm & Village, a museum of the Western Reserve Historical Society (WRHS) is a "living history museum depicting life in the 19th century through agricultural practices and everyday craft and trade demonstrations such as glassblowing, pottery, spinning and weaving, and more."

Hale Farm's core mission is education, a place where the past is brought to life through a combination of living history experiences, historic architecture, domestic craft and trade demonstrations, farming and heritage gardens.

Hale Farm & Village depicts rural life in the Western Reserve through the experiences of three generations of Hales, from pioneer Jonathan Hale's arrival in 1810 through the bequest of the family farm to WRHS by his great granddaughter, Clara Belle Ritchie, in 1956. Her will directed WRHS to "establish The Hale Farm as a museum, open to the public to the end that the greatest number of persons may be informed as to the history and culture of the Western Reserve." In 1973, The Hale Farm was listed on the National Register of Historic Places as the Jonathan Hale Homestead.

Located in the heart of the Cuyahoga Valley National Park, Hale Farm & Village is the ultimate outdoor classroom with thirty-two historic structures, heritage breeds of livestock, gardens and crop fields, costumed staff, early American craft and trade demonstrations, and a year-round calendar of educational and public programs and community events that explore the rich, rural American experience in the Western Reserve.

All content from Kiddle encyclopedia articles (including the article images and facts) can be freely used under Attribution-ShareAlike license, unless stated otherwise. Cite this article:
Western Reserve Historical Society Facts for Kids. Kiddle Encyclopedia.