Geneva is a city in Ashtabula County, Ohio, United States. The area which would become Geneva was originally settled in 1805, and was incorporated as a city in 1958. It is named after Geneva, New York. The population was 6,215 at the 2010 census.

The area which would eventually be Geneva was first settled in 1805 by a handful of settlers from Charlotte, New York. In 1806, settlers from Harpersfield, New York arrived and established Harpersfield Township, which included the present-day townships of Geneva, Trumbull and Hartsgrove. However, in 1816, citizens of Harpersfield decided to withdraw from the township and form their own township, which then became Geneva Township, named after Geneva, New York. In 1866, the town of Geneva then became a village, and, nearly one hundred years later, in 1958, Geneva was incorporated as a city.

Three major routes pass through (or near) Geneva. Interstate 90, the northernmost east-west and coast-to-coast interstate, passes roughly two miles south of the city. There, a full-access interchange (exit 218) intersects Route 534, which passes through Geneva and terminates north of the city. Route 534 intersects Route 20, the longest road in the United States, in downtown Geneva.

The Grape Jamboree is an annual celebration of the area's grape-growing and wine-producing industries. The festival occurs during the final full weekend of September, and lasts both days. Festivities include two parades, one held on each day, as well as various amusement park-type rides and typical festival food kiosks set up on the main streets (Route 20 and Route 534) of Geneva.

An addition to Ashtabula County's existing covered bridges, the West Liberty Covered Bridge, purported to be the shortest covered bridge in the United States, opened in 2011.

On April 12, 1966, more than 200 people attended ceremonies at Geneva High School at which it was revealed that the city had claimed ownership of the moon. The "Declaration of Lunar Ownership" contained 35 signatures, and was revealed simultaneously with the city's 100th anniversary. It claimed that the "physical property of the moon shall belong exclusively to the citizens of Geneva, Ohio," and that unfriendly acts upon the city would be responded to with "all human dignity and moral circumspection." The city also held the right to rent or lease its moon holdings via a two-thirds vote of the city's entire population, and provided for the sale of 100 deeds for 100 acres (0.40 km2) of land, each acre priced at US$100.

Geneva is home to HDT Global, an industrial outfit that manufactures air conditioning, heating, and filtration units for heavy industry. In recent years, they have been awarded over $100 million in U.S. Department of Defense contracts.

In January 2020, a major local economic driver, SPIRE Institute and Academy, was sold to a new owner. It was later announced that there are plans to expand their current programs and offerings in Geneva and in Maryland. 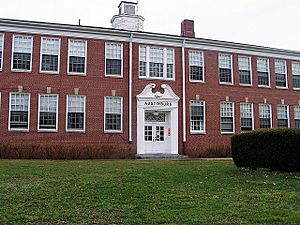 Former Austinburg Elementary, one of the district's three elementary schools.

Three major routes pass through (or near) Geneva. Interstate 90, the northernmost east–west and coast-to-coast interstate, passes roughly two miles south of the city. There, a full-access interchange (exit 218) intersects Route 534, which passes through Geneva and terminates north of the city. Route 534 intersects Route 20, the longest road in the United States, in downtown Geneva.

All content from Kiddle encyclopedia articles (including the article images and facts) can be freely used under Attribution-ShareAlike license, unless stated otherwise. Cite this article:
Geneva, Ohio Facts for Kids. Kiddle Encyclopedia.