Lake County is a county in the U.S. state of Ohio. As of the 2020 census, the population was 232,603. The county seat is Painesville. The county was established on March 6, 1840 from land given by Cuyahoga and Geauga Counties. Its name is derived from its location on the southern shore of Lake Erie.

After the discovery of the New World, the land that became Lake County was originally part of the French colony of Canada (New France), which was ceded in 1763 to Great Britain and renamed Province of Quebec. In the late 18th century the land became part of the Connecticut Western Reserve in the Northwest Territory, then was purchased by the Connecticut Land Company in 1795.

Lake County is served by the following libraries: 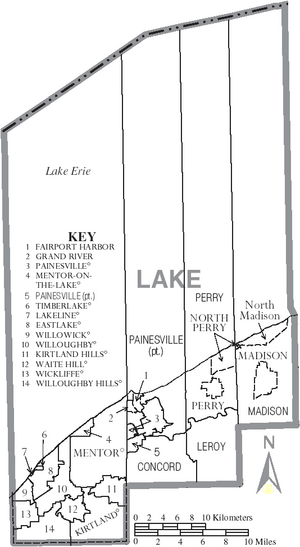 Map of Lake County, Ohio with Municipal and Township Labels

All content from Kiddle encyclopedia articles (including the article images and facts) can be freely used under Attribution-ShareAlike license, unless stated otherwise. Cite this article:
Lake County, Ohio Facts for Kids. Kiddle Encyclopedia.