Public Square is the central plaza of downtown Cleveland, Ohio. Based on an 18th-century New England model, it was part of the original 1796 town plat overseen by Moses Cleaveland, and remains an integral part of the city's center. It was added to the National Register of Historic Places in 1975.

The 10-acre (4.0 ha) square is centered on the former intersection of Superior Avenue and Ontario Street. Cleveland's three tallest buildings, Key Tower, 200 Public Square and the Terminal Tower, face the square. Other landmarks adjacent to Public Square include the 1855 Old Stone Church and the former Higbee's department store made famous in the 1983 film A Christmas Story, which has been occupied by the Jack Cleveland Casino since 2012.

Originally designed as four separate squares bisected by Superior Avenue and Ontario Street, the square was redeveloped in 2016 by the city into a more pedestrian-friendly environment by routing most traffic around the square. The section of Ontario Street through the square was removed, while the section of Superior Avenue was rebuilt to only allow buses with stops for multiple bus lines of the Greater Cleveland Regional Transit Authority. The northern half of the square is mostly green space and includes a statue to reformist mayor Tom L. Johnson. The southern half is mostly a paved plaza area with a cafe and water feature adjacent to the 125-foot-tall (38 m) Soldiers' and Sailors' Monument and a statue of city founder Moses Cleaveland. 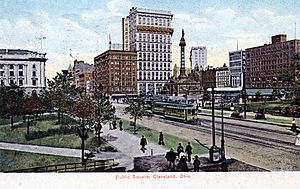 Postcard of Public Square in the 1910s

Public Square was part of the Connecticut Land Company's original plan for the city, which were overseen by Moses Cleaveland in the 1790s. The square is signature of the layout for early New England towns, which Cleveland was modeled after. While it initially served as a common pasture for settlers' animals, less than a century later Public Square was the height of modernity, when in 1879 it became the first street in the world to be lit with electric street lights, arc lamps designed by Cleveland native Charles F. Brush. The square was added to the National Register of Historic Places on December 18, 1975.

A parking lot now faces the northwest quadrant of the square. A 12-story building, which was built on the spot in 1913, was demolished in 1990 to make way for the new Ameritrust Center, an 1,197-foot (365 m) skyscraper designed by New York's Kohn Pedersen Fox. Before construction began, Ameritrust was acquired by Society Bank, which was also planning to construct and subsequently relocate to a new building on Public Square—Key Tower (formerly known as Society Center). Because Society did not need two skyscrapers, plans for the Ameritrust building across the square were scrapped.

Public Square is often the site of political rallies and civic functions, including a free annual Independence Day concert by the Cleveland Orchestra. At the Balloonfest '86, close to 1.5 million balloons rose up from Public Square, engulfing the Terminal Tower and setting a world record. 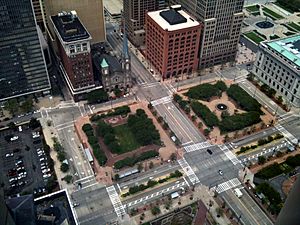 In collaboration with landscape architect James Corner, the city in 2009 began to explore concepts for a redesign of the square. In October 2011, Cleveland mayor Frank Jackson proposed his plan to redevelop the square, which included closing Superior Avenue and Ontario Street to create a large green space in the center. On October 23, 2014, the Cleveland Landmarks Commission approved a plan which closed Ontario Street but kept Superior Avenue open to bus traffic, and kept the Soldiers' and Sailors' Monument prominent.

The project began construction on March 9, 2015, and was officially opened on June 30, 2016. Public Square's development was showcased during the Cleveland Cavaliers championship parade as a welcome sight with much of the construction materials removed to display the renovation. At first, buses did not run along Superior Avenue as planned, but in order to avoid a $12 million repayment of grants to the Federal Transit Administration, the Greater Cleveland Regional Transit Authority agreed to run buses along it by March 2017. The City of Cleveland installed Jersey Barriers along Superior Avenue due to fears of terrorism contrary to the original design.

Public Square in 1912, facing east. The Old Stone Church is the third building on the left. The Soldiers' and Sailors' Monument is on the right, in front of the Williamson Building, which was later demolished for 200 Public Square.
Black History Month on Kiddle
Famous African-American Pilots:

All content from Kiddle encyclopedia articles (including the article images and facts) can be freely used under Attribution-ShareAlike license, unless stated otherwise. Cite this article:
Public Square, Cleveland Facts for Kids. Kiddle Encyclopedia.