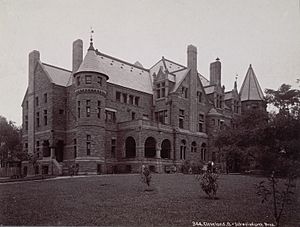 Euclid Avenue is a major street in Cleveland, Ohio. It runs northeasterly from the Public Square in Downtown Cleveland, through the cities of East Cleveland, Euclid and Wickliffe, to the suburb of Willoughby as a part of U.S. Route 20 and U.S. Route 6. The street passes Playhouse Square, the University Circle, Cleveland State University, the Cleveland Clinic, Severance Hall, Tifereth Israel (The Temple), Case Western Reserve University and University Hospitals Case Medical Center. The HealthLine bus rapid transit line runs in designated bus lanes in the median of Euclid Avenue from Public Square to Louis Stokes Station at Windermere in East Cleveland.

It received nationwide attention from the 1860s to the 1920s for its beauty and wealth, including a string of mansions that came to be known as Millionaires' Row. There are several theaters, banks, and churches along Euclid, as well as Cleveland's oldest extant building, the Dunham Tavern. A large reconstruction project, which brought the HealthLine to the street, was completed in 2008. 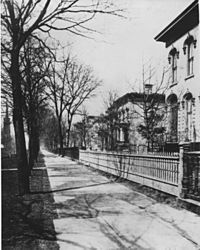 In the second half of the 19th century and early in the 20th century, Euclid Avenue was internationally known. Baedeker's Travel Guides called the elm-lined avenue "The Showplace of America", and designated it as a must see for travelers from Europe. The concentration of wealth was unparalleled; the tax valuation of the mansions along "the Avenue" far exceeded the valuation of New York's Fifth Avenue in the late 19th century. Accounts at the time compared it to the Avenue des Champs-Élysées in Paris and the Unter den Linden in Berlin.

Euclid Avenue was an elegant showcase for Cleveland's wealthy citizens, who built their high, grand mansions high on a ridge overlooking Lake Erie. Set two to five acres back from the avenue, which was paved with Medina sandstone, the mansions seemed to float amid spacious, landscaped grounds.

Architect Charles F. Schweinfurth designed at least 15 mansions on the street. Samuel Mather's mansion, built around 1910, "was among the last" to be built on Euclid Avenue. The Mather Mansion remains as part of Cleveland State University, but most of the homes were later demolished. 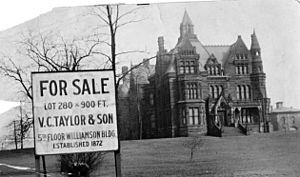 Samuel Andrews mansion. He was one of the founders of Standard Oil along with JD Rockefeller. He sold his shares early...in 1874 and did not reap the benefit the others did. This home was built in 1882-85 and was demolished in 1923.

Growth of commercial district and decline of Millionaires' Row

Charles Lathrop Pack is credited with at least part of the development of Euclid Avenue, on which he lived from about 1888 to the early years of the 20th century, into a thriving business district. According to Eyle, "In 1913, an article about Charles reported that 'inside of ten years...the [one-story, commercial buildings that he had developed at the lower end of Euclid Avenue] have disappeared. In their stead are skyscrapers, great retail establishments, magnificent banks, and a hotel that cost $2,000,000. Much of the land is owned by Mr. Pack and is leased for long periods. He helped to organize the companies which erected the buildings. It is said that his rentals, out of which not a penny is subtracted for taxes or anything else, amount to $100,000 a year."

As Cleveland's commercial district began to push eastward along Euclid Avenue, families moved east towards University Circle. However, southeast of University Circle, the topography of the area rises sharply into what is referred to as "The Heights," and the development of Cleveland Heights and Shaker Heights, along with more efficient means of travel, became more attractive than the increasingly commercialized Euclid Avenue.

By the 1920s, the former "Millionaires' Row" was in decline. During the Great Depression, many mansions were converted by their owners into rooming houses, which accelerated the decline. In the 1950s, Cleveland's Innerbelt Freeway cut through the Euclid Avenue neighborhood between downtown and the rail crossing at East 55th Street. By the 1960s, the street that once rivaled Fifth Avenue as the most expensive address in America was a two-mile (3 km) long slum of commercial buildings and substandard housing. In the late 1960s, Cleveland Cavaliers owner Nick Mileti announced plans to move the basketball club from Euclid Avenue's Cleveland Arena to a new arena in suburban Richfield Township. 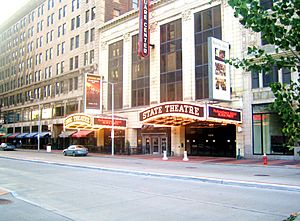 Eight houses from the era remain on Euclid, including the Samuel Mather and Howe mansions owned and used by Cleveland State University. The most recent to be demolished was the Lyman Treadway Mansion, which served as part of the Cleveland Museum of Health from the 1930s until it was razed in 2002 for a new museum building.

The Euclid Avenue Historic District is listed on the National Register of Historic Places.

On August 5, 1914, the American Traffic Signal Company installed a traffic signal system on the corner of East 105th Street and Euclid Avenue, the first traffic light installed in the United States. 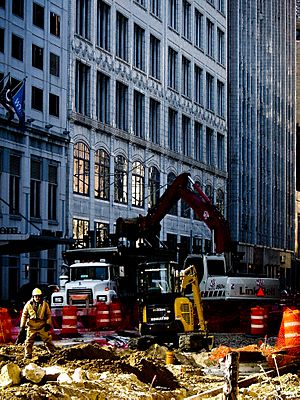 Euclid Avenue during the construction of the Euclid Corridor project

In April 2006, parts of Euclid Avenue were closed to traffic for the filming of a scene from the film Spider-Man 3. No major stars were on location, but the filming drew thousands of gawkers. Most of the filming involved explosions and destroyed cars, with hired extras walking the sidewalks. The sections of the street that were closed off were redressed to resemble a city street in New York City, complete with magazine stands and poster-covered walls.

The Greater Cleveland Regional Transit Authority completely refurbished the western section of Euclid Avenue as part of the Euclid Corridor Transportation Project, which opened fully in 2008. A bus rapid transit line, the HealthLine, now runs from Public Square to the Stokes Rapid Transit station in East Cleveland, which is the eastern terminus of the Red Line rapid transit route. The refurbishing also entailed development – as of November 2009[update], more than $3.3 billion worth of completed or proposed urban renewal projects lined the street and surrounding area.

All content from Kiddle encyclopedia articles (including the article images and facts) can be freely used under Attribution-ShareAlike license, unless stated otherwise. Cite this article:
Euclid Avenue (Cleveland) Facts for Kids. Kiddle Encyclopedia.