Kids Encyclopedia Facts
For other monuments with the same name, see Soldiers and Sailors Monument (disambiguation). 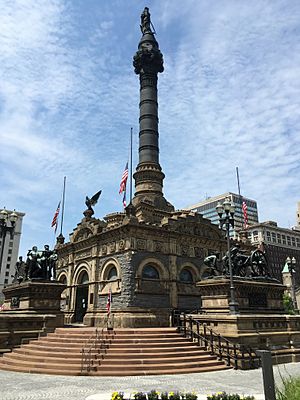 The Soldiers' and Sailors' Monument on Public Square in Downtown Cleveland. 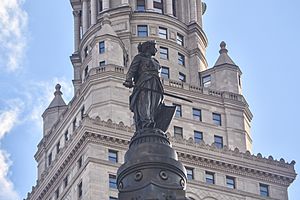 Lady Liberty atop the Soldiers' and Sailors' Monument with the Terminal Tower in the background. 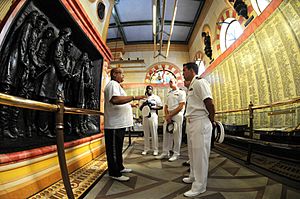 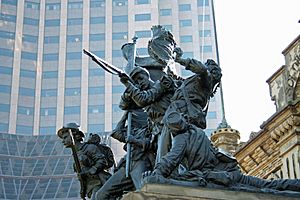 One of the four sculptural groupings on the monument's exterior.

The Cuyahoga County Soldiers' and Sailors' Monument is a major Civil War monument in Cleveland, Ohio, honoring the more than 9,000 individuals from Cuyahoga County who served the Union throughout the war. It was dedicated on July 4, 1894 and is located on the southeast quadrant of Public Square in Downtown Cleveland. It was designed by architect and Civil War veteran Levi Scofield, who also created the monument's sculptures. The monument is regularly open to the public free of charge and welcomes thousands of visitors each year.

The monument consists of an elevated base, surmounted by a 125 ft (38.1 m) column capped with a 15 ft (4.5 m) high statue depicting a personification of Liberty. Levi Scofield, the architect and sculptor of the monument, is also known for having designed the Ohio State Reformatory, located in Mansfield, Ohio as well as Cleveland's Schofield Building, the former headquarters of his architectural firm known today as The Kimpton Schofield Hotel.

The interior provides peace and tranquility. Bronze panels mark the beginning and end of the war, as well as Lincoln’s freeing of the slaves. Another panel shows the names of 100 women of the Northern Ohio Soldiers and Sailors Relief Society. In the corner of the panel sits a Catholic nun, from the Ursuline order, who still run Cleveland’s St. Vincent Charity Medical Center.

Inside the memorial building are a series of marble tablets listing 9,000 Civil War veterans that served with Cuyahoga County regiments or were from Cuyahoga County. Also inside the base are four bronze relief sculptures depicting the Soldiers' Aid Society, Emancipation of the Slaves, Beginning of the War in Ohio and the End of the War, as well as busts of Col. James Barnett, Scofield, and several Ohio officers who were killed in action during the war.

In 2011, researchers discovered that the names of 140 black soldiers from the area were omitted from the tablets. On June 19th, 2019, after more than a decade of extensive research, 107 members of the United States Colored Troops were officially added to the monument's Roll of Honor with a formal ceremony.

Restoration of the monument began October 26, 2008, and was expected to last approximately nine months with a cost $1.5 million. Funds came from federal, state and local governments, veterans' and community groups. Work included cleaning interior and exterior stonework, structural repairs and painting, restoring chandeliers, installing upgraded heating and lighting, repairs to stained glass windows, installing air conditioning and making the monument accessible to disabled visitors. When the marble tablets were created, names were etched with acid, then inked. Over time, the dyes from the ink leached into the marble and discolored it. Workers cleaned each name and restored the marble's original patina. The renovated monument opened June 5, 2010, with $2 million spent on work.

From the time of dedication until the 1940s, plantings around the monument depicted 24 army corps badges and 5 badges of Civil War organizations. After construction work finished, volunteer gardeners used over 16,000 plants to recreate the 5 organization badges plus two based on illustrations in the memorial room and one for the Daughters of Union Veterans. The plants cost $6,500 and were specially cultivated for the project. The 24 army badges could not be recreated because of budget constraints.

All content from Kiddle encyclopedia articles (including the article images and facts) can be freely used under Attribution-ShareAlike license, unless stated otherwise. Cite this article:
Soldiers' and Sailors' Monument (Cleveland) Facts for Kids. Kiddle Encyclopedia.