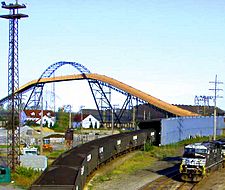 Railyard in the port of Ashtabula

Ashtabula ( ASH-tə-BYU-lə) is a city in Ashtabula County, Ohio, United States, and the center of the Ashtabula Micropolitan Statistical Area (as defined by the United States Census Bureau in 2003). It is located at the mouth of the Ashtabula River on Lake Erie, one of the Great Lakes, across from the province of Ontario, Canada and 53 miles (85 km) northeast of Cleveland. The name Ashtabula is derived from ashtepihəle, which means 'always enough fish to be shared around' in the Lenape language.

The city became an important destination on the Underground Railroad in the middle 19th century, as refugee slaves could take ships to Canada and freedom. Even in the free state of Ohio, they were at risk of being captured by slavecatchers. Beginning in the late 19th century, the city became a major coal port on Lake Erie at the mouth of the Ashtabula River northeast of Cleveland. Coal and iron were shipped here, the latter from the Mesabi Range in Minnesota. The city attracted immigrants from Finland, Sweden and Italy in the industrial period. Ashtabula hosts an annual Blessing of the Fleet Celebration, usually in late May or early June. As part of the celebration, a religious procession and prayer service is held at Ashtabula Harbor. The city was the site of the FinnFestUSA in 2007, a celebration of Finnish Americans.

This area had long been inhabited by indigenous peoples. After the American Revolutionary War, the United States mounted the Northwest Indian War to push Native American peoples out of what it then called the Northwest - the area of the Midwest south of the Great Lakes and west of the Appalachian Mountains. The success of this military effort resulted in more European Americans entering Ohio and nearby territories.

The site of Ashtabula was settled by such European Americans beginning in 1803. The city was incorporated in 1891. Located directly on Lake Erie and developed as a port for trade, the city contained several stops on the Underground Railroad. This informal, secret system was the means by which anti-slavery supporters helped escaped African-American slaves reach freedom in Canada in the years before the American Civil War. While Ohio was a free state, many refugee slaves still felt at risk of slavecatchers here, particularly after the Fugitive Slave Law of 1850 was passed. It required enforcement and cooperation by residents of free states to return escaped slaves and was biased toward slavecatchers, requiring little documentation of their claims. Among the Underground Railroad sites in Ashtabula is Hubbard House, one of the handful of former surviving termination points. Refugee slaves stayed in a basement of the house adjacent to the lake and then left on the next safe boat to Canada, gaining their freedom once they arrived in Ontario.

The city's harbor has been important as a large ore and coal port since the end of the 19th century, and integral to the steel manufacturing that was developed around the Great Lakes. Lake steamers and barges, built at shipyards along the Great Lakes and setting new records for size and tonnage, delivered cargoes of iron ore from the Mesabi Range in Minnesota. This continues as a coal port; a long coal ramp is visible in the harbor. Ore shipments are unloaded from 'lakers' (Great Lakes freighters) and shipped to surviving steel mills in Pennsylvania. Industrial jobs have declined since the late 20th century with much steel manufacturing moved offshore.

Many European immigrants, particularly from Finland, Sweden, and Italy, were attracted to the industrial jobs in Ashtabula in the late 19th and early 20th centuries, as they could learn and accomplish tasks without having a great command of English. Ethnic rivalries among these groups were once a major influence on politics and daily life in Ashtabula.

These factors contributed to Ashtabula in 1915 being the first city in Ohio to adopt an election system based on proportional representation (PR) and single transfer voting (STV), which was believed to enable better representational government. It enabled minorities to enter politics But political bosses and parties that lost power under this system mounted a steady opposition that ultimately resulted in repeal of the city's charter and restoration of plurality voting, or 'winner take all.'

A substantial percentage of the current residents are descended from those early 20th-century immigrants. The population in the City of Ashtabula grew steadily until 1970, but has declined in recent years due to industrial restructuring and loss of jobs. Since the late 20th century, the city has become a destination for Hispanic or Latino immigrants, who by the 2010 census made up 9.3% of the population. (See 'Demographics' section below.)

Construction of railroads connected Ashtabula to a national network that contributed to its success as a port. On December 29, 1876, one of the nation's most notorious rail accidents occurred, known as the Ashtabula River Railroad Disaster, Ashtabula Horror, or Ashtabula bridge disaster. As Lake Shore and Michigan Southern Railway Train No. 5, The Pacific Express, crossed the Ashtabula River bridge, the Howe truss structure collapsed, dropping the second locomotive and 11 passenger cars into the frozen creek 150 feet (46 m) below. A fire was started by the car stoves, and of the 159 people on board, 92 were killed and 64 were injured.

A rail ferry, also named Ashtabula, used to run from Ashtabula to Port Burwell, Ontario. The ferry was launched in 1906 and operated successfully for many decades. It collided with the steamer SS Ben Morell in September 1958, causing the ferry to sink.

On August 10, 1955, a natural gas leak was ignited by electrical equipment, or lighting. The resulting explosion destroyed a restaurant and five other buildings. 21 people were killed, and 15 injured.

In the 20th century Ashtabula developed rapidly as a major shipping and commercial center because of its access to Lake Erie and nearly 30 miles (48 km) of shoreline.

During the 1950s, the area experienced growth with an expanding chemical industry and increasing harbor activity, making Ashtabula one of the most important port cities of the Great Lakes. Other historical industries in the area included a Rockwell International plant on Route 20 on the western side of Ashtabula, which manufactured brakes for the Space Shuttle program, and the extrusion of depleted and enriched uranium at the Reactive Metals Extrusion plant on East 21st Street.

Due to such industrial uses, however, there was extensive environmental contamination. The Ashtabula River and harbor were designated as a significant Superfund site by the Environmental Protection Agency in the late 20th century. A multi-year process of environmental cleanup of toxic wastes and soils was needed; cleanup concluded with river dredging in 2012-2014.

Ashtabula Harbor hosts an annual 'Blessing of the Fleet' community festival. This Blessing of the Fleet began as a practice of priests for Catholic Portuguese and Irish fishermen and tugmen who had settled in Ashtabula. During the 1930s, the Blessing was a small, almost private affair in early April conducted by a few tugmen, their parish priest, and an acolyte, according to their traditions. It took place annually when the Great Lakes were free enough of ice to be open for regular traffic. By 1950, this event was held as a public ceremony under the auspices of Mother of Sorrows parish. In 1974, the Blessing of the Fleet became a community affair, with all of Ashtabula's religious and harbor community participating.

Ashtabula is bordered by Lake Erie to the north and has a prominent harbor where the Ashtabula River flows into the lake. The Ashtabula Harbor was a primary coal harbor and still serves to ship. It has two public beaches: Walnut Beach, near the harbor, and Lake Shore Park, originally a Public Works Administration project during the Great Depression, on the opposite side of the harbor.

Part of the city lies in Ashtabula Township, and part lies in Saybrook Township.

The Ashtabula area receives a considerable amount of snow throughout the winter, with the average snowfall being 68 inches. Much of the snow comes from lake-effect snow bands from the Great Lakes.

The Ashtabula Area School District serves Ashtabula (its high school is Lakeside High School). Kent State University at Ashtabula is located in the city, providing a local campus of this institution. As for private schools, Ashtabula or Saybrook is home to Saint John School, a K–12 school under the Diocese of Youngstown which has incorporated Ashtabula's previous parish schools and independent Catholic high school as one institution.

Ashtabula has two public libraries: the Harbor Topky Memorial Library, and a branch of the Ashtabula County District Library.

All content from Kiddle encyclopedia articles (including the article images and facts) can be freely used under Attribution-ShareAlike license, unless stated otherwise. Cite this article:
Ashtabula, Ohio Facts for Kids. Kiddle Encyclopedia.