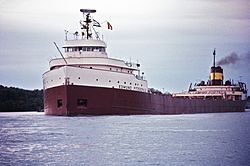 The SS Edmund Fitzgerald in 1971

SS Edmund Fitzgerald was a freight ship on Lake Superior, carrying iron ore, which sank on November 10, 1975 at around 7:30 PM. The ship was known for being the biggest of its time weighing in at around 13, 600 tons, Edmund Fitzgerald was one of the largest “iron boats” working the Great Lakes. Nobody know how the boat sunk, however it is very possible that the dangerously high weight of its cargo, and the violent winds and waves caused the ship to sink. All 29 men aboard the boat died and to this day no bodies have been recovered. To remember the men on the S.S Fitzgerald a song was written by the Canadian singer Gordon Lightfoot the song was titled The Wreck of the Edmund Fitzgerald. The song describes what the ship itself and touches on some theory's on how it may have sunk, interestingly enough the original song contained the passage:

This passage was proven to be false as a dive team sent in to recover the bodies found the main hatch way to be in perfect condition. When informed of this Gordon Lightfoot rewrote the verse to:

All content from Kiddle encyclopedia articles (including the article images and facts) can be freely used under Attribution-ShareAlike license, unless stated otherwise. Cite this article:
SS Edmund Fitzgerald Facts for Kids. Kiddle Encyclopedia.