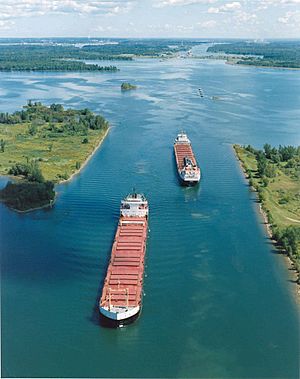 Ships in the Saint Lawrence Seaway

The Saint Lawrence Seaway is a navigable waterway in North America. It is 370 miles (600 km) long and allows marine vessels to go from the Atlantic Ocean to all of the Great Lakes. Most of it is in Canada, but a small part of it is in the United States. It gets its name from the Saint Lawrence River, the river which goes from Lake Ontario to the Gulf of Saint Lawrence.

Before the Seaway was built, there was no way for boats and ships to get around the rapids and dams on the Saint Lawrence River. Big ships could not pass Niagara Falls, the waterfalls on the Niagara River between Lake Ontario and Lake Erie. In the early 20th century, the governments of both Canada and the U.S. saw that the cities near the Great Lakes could grow and become an important part of the economy of both countries. There were people in both countries who did not want the Seaway to be built, but the project went ahead.

In 1954, construction began on a system of canals from Montreal in the east to Port Colborne in the west. It included 15 locks where the water level changes, and several places where electricity could be made from the flow of water. The project also involved making the Welland Canal bigger so that large ships can pass through it.

The Seaway was completed in 1959 at a cost of C$470 million. Today, thousands of vessels use it every year, from small recreational boats to huge ocean liners. About 40 to 50 million tonnes of cargo are moved on these ships and they go to all parts of the world including Europe, the Middle East, and Africa. It has been an important part of the economic growth of cities like Toronto, Hamilton, Buffalo, Cleveland, Detroit, Milwaukee, and Chicago. There are plans to make the Seaway even wider so that container ships as big as those that travel through the Panama Canal can use it.

All content from Kiddle encyclopedia articles (including the article images and facts) can be freely used under Attribution-ShareAlike license, unless stated otherwise. Cite this article:
Saint Lawrence Seaway Facts for Kids. Kiddle Encyclopedia.