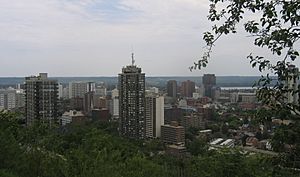 Hamilton is a medium-sized city in the Canadian province of Ontario.

Hamilton is an important industrial city located on Lake Ontario, part of the Golden Horseshoe region in Ontario. It has a history of being a dirty city. It's reputation is slowly changing. People now see Hamilton for its arts & music culture.

Since the 1980s, industries in Hamilton have had trouble making money and keeping people working. In 2004, Stelco filed for bankruptcy. This means Stelco asked the courts if it could stop paying money it borrowed back to banks. The future for industry does not look good for Hamiltonians.

However, other businesses look much better. People might not think of schools like McMaster University and Mohawk College as businesses, but they are. Students and teachers come to Hamilton and spend their money here. Doctors, teachers, nurses and other professionals train here. Even Tim Hortons doughnut stores started in Hamilton in 1965.

CH has been a local TV station in Hamilton since 1954. Steve Smith, known for starring in The Red Green Show, started working at CH. Tiny Talent Time is another popular show on CHCH which features many children.

Some movies were filmed in and around Hamilton, such as Anne of Green Gables,5ive Girls and Rocky V, because it looks like other places.

Folksinger Stan Rogers was born in Dundas, which became part of Hamilton in 2001. The Appleton sisters, now famous in Britain, were born in Hamilton. Daniel Lanois is an important singer himself and helped the band U2 with its music. He lived in Hamilton and recorded at Grant Avenue Studios.

The Hamilton Spectator newspaper has been around since the 1840s. It offers tours showing its giant printing press and writers' offices. It also has school projects which include a classroom subscription to the newspaper for every student.

Politics is the way people choose the leaders of their communities and the things they decide are important enough to do. Hamiltonians like choosing socially minded people to governm themselves, especially women and minorities. Many people who were mayors, members of Provincial Parliament (MPPs) or members of Parliament (MPs) have things named for them in the city, such as:

Netural and Mohawk Native Canadians of the Six Nations were the first people to live in this area. In 1616, Étienne Brûlé probably became the first European to visit what is now Hamilton. United Empire Loyalists moved into the Hamilton area during and after the American Revolution. The Battle of Stoney Creek was fought during the War of 1812 in what is now Hamilton.

In the mid- to late 1800s, Hamilton became an industrial city with lots of factories. It was close to limestone from the Niagara Escarpment, coal from the United States, iron ore mined from northern Ontario. But factories demanded that people work hard jobs for long hours. In 1872, Hamilton workers marched for a work day of no more than nine hours! The two large steel factories were Stelco (the Steel Company of Canada), created in 1910 and the Dofasco (Dominion Steel Casting Company) in 1912. Dominion is an old word often heard to describe Canada when it was part of the British Empire.

In the 1930s, the Great Depression hit Hamilton. People were unemployed and poor. Factories stoped running. Times were hard. Then the Second World War started and people got jobs again in the army and building guns for the army. August 19, 1942, hundreds of young men from Hamilton were killed by the German army when they tried to attack Dieppe in France.

There are many amateur sports in Hamilton. People of all ages can run in the Around the Bay Race. It takes 30 km to go around the edge of Hamilton Harbour or Burlington Bay. The Hamilton Spectator also hosts amateur indoor games. Every year, children from Hamilton and Flint, Michigan compete in the Canusa Games.

The Commonwealth Games are like the Olympics for people who used to be ruled by Britain. In 1930, Hamilton became the first ever host for what ere then called the Empire Games. The city also tried to host the 2010 Commonwealth Games.

Here in Hamilton we also have recreational leagues for kids to enjoy their childhood by playing many recreational sports such as Hockey(Stoney Creek Minor Hockey), Soccer(Stoney Creek Soccer Club), and Football with (Steelcity Ironmen). In addition, there are a number of other community sport clubs like the Mt Hamilton Youth Soccer Club which has provided an avenue for children to play soccer since 1964.

There are many buses, apart from the school buses operated by the Hamilton-Wentworth District School Board. For $2.55, the Hamilton Street Railway or HSR takes people inside and across the city.

Travellers can also get to places like Niagara Falls, Dunnville, Buffalo, Kitchener, and London. These buses are run by companies called Greyhound, Trentway Wagar and McCoy. GO Transit has buses and trains that go to Toronto. Using GO however is not a part of the HSR.

The city streets in the old city of Hamilton follow a pattern. The big streets going north and south are in straight lines. When they are on the Mountain, they have "Upper" in front the their names, except for Garth Street which should be Upper Dundurn Street.

King and Main Streets are major roads that are almost parallel or side by side one another. They cross at the Delta in east Hamilton. For most of King and Main, cars could only travel one way. So instead of thinking of them as two streets, think of them as one street with a very wide boulevard between them. This changed in the early 2000s, and most of the streets in Downtown Hamilton are now two-way.

All content from Kiddle encyclopedia articles (including the article images and facts) can be freely used under Attribution-ShareAlike license, unless stated otherwise. Cite this article:
Hamilton, Ontario Facts for Kids. Kiddle Encyclopedia.