African Lion Safari is a family-owned safari park in Southern Ontario, Canada, straddling the cities of Hamilton and Cambridge, located 100 kilometres (62 mi) west of Toronto. Guests may tour seven game reserves, with a total area of about 740 acres (300 hectares), on tour buses or in visitors' own vehicles, where animals roam freely in contained areas. Accompanying the game reserves is a walking section where exotic birds and primates, as well as the park's herd of Asian elephants, are on display.

This safari park was founded by Gordon Debenham "Don" Dailley, a retired Canadian Army colonel, and opened its doors on August 21, 1969. Dailley initially partnered with the Chipperfield family from England to purchase four farms in the Rockton, Ontario area totaling 250 hectares (620 acres). He bought out the Chipperfields in the early 1970s. It remains privately owned, and the only significant feature was the drive-through reserve. In 1971, the park began working with Asian elephants, and in 1985 they started to make a concentrated effort to breed Asian elephants. Over the years, successful breeding of 30 endangered species and 20 threatened species has occurred in the park. 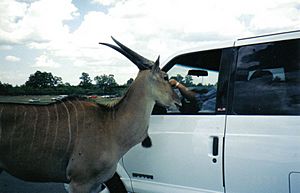 On any of the seven reserves, visitors are caged in their car and the animals roam in large enclosures that range from 2 to 20 hectares (4.9 to 49.4 acres). 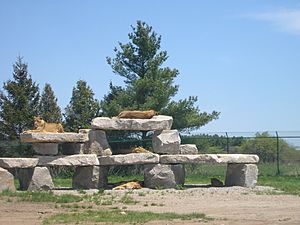 Between the Nairobi Sanctuary and the Simba Lion Country is the Cheeta breeding Center, which is home to cheetahs. This preserve features several enclosures where the cheetahs live either separately or grouped.

Simba Lion Country is home to African lions. The reserve consists of, like the other reserves such as the Nairobi Sanctuary, a grassy field. This reserve is notable because it has a structure made out of rocks so the lions can rest.

Timbavati Lion Country is home to white lions, also known as Timbavati lions. This reserve also has a rock structure for the lions to rest or play on.

Wankie Bushland Trail is home to olive baboons, bongo, miniature zebu, and malaysian tapirs. The baboons' tower is a house and a playground for them. 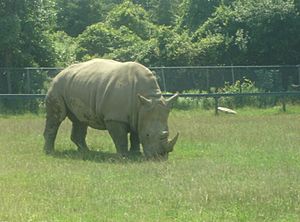 The African Lion Safari offers two tours for no additional charge; the first one is by boat around a lake whose islands are inhabited by various primates, and the second by train through a natural wetland.

The Nature Boy is a scenic railway that travels through natural forest where visitors see native wildlife and several exotic species such as Fallow Deer and reindeer. 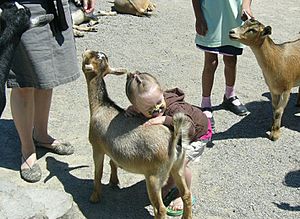 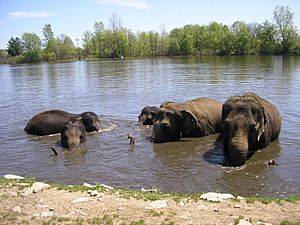 The park is involved in the International SSPs for Asian elephants, cheetahs, white rhinos, and cinereous vultures. It has provided captive bred barn owls, burrowing owls, trumpeter swans, ferruginous hawks, and a bald eagle to reintroduction programs for release into the wild.

The park currently claims to have the most successful Asian elephant breeding program in North America, and in 2008 became home to the first third generation Asian elephant in North America. It has received several CAZA awards, including those recognizing outstanding achievements in the care of both cheetahs and giraffes.

In 2010, "Jake" became African Lion Safari's first successful Asian elephant birth from an artificial insemination, and the first birth of this kind in Canada. 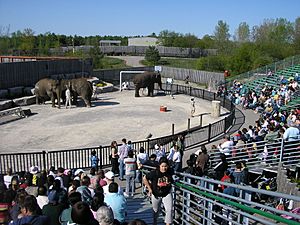 All content from Kiddle encyclopedia articles (including the article images and facts) can be freely used under Attribution-ShareAlike license, unless stated otherwise. Cite this article:
African Lion Safari Facts for Kids. Kiddle Encyclopedia.