The white lion is a rare color mutation of the lion, specifically the Southern African lion. White lions in the area of Timbavati were thought to have been indigenous to the Timbavati region of South Africa for centuries, although the earliest recorded sighting in this region was in 1938. Regarded as divine by locals, white lions first came to public attention in the 1970s, in Chris McBride's book The White Lions of Timbavati.

White lions are not albinos. Their white color is caused by a recessive trait from a less-severe mutation in the same gene that causes albinism. They vary from blonde to near-white. This coloration does not appear to pose a disadvantage to their survival. The white lions of the Global White Lion Protection Trust (GWLPT) have been reintroduced into their natural habitat and have been hunting and breeding successfully without human intervention for a significant amount of time. 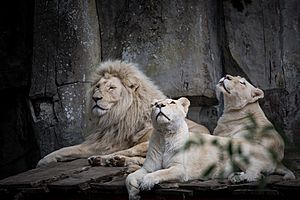 A recessive gene gives white lions their unusual colors. White lions can therefore be selectively bred for zoos, animal shows and wildlife parks. Some critics maintain that white lions should not be introduced into the wild because of the inbreeding that has taken place in zoos and breeding camps. However, ethical reintroduction programs such as The Global White Lion Protection Trust have ensured through the use of scientific methodologies that the lions in their program are not inbred.

The genetic marker determining the white colouration was identified in a collaborative study with 5 other countries in October 2013, and is being used to ensure genetic integrity and ultimately to determine the frequency of occurrence of the gene in the wild population. 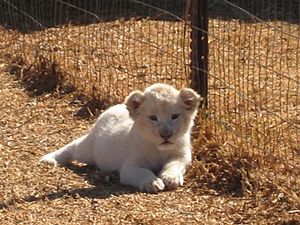 A cub at Kromdraai, South Africa

From the 1970s onwards, prized for their rarity, the white lions and many 'normal' coloured (tawny) lions carrying the white lion gene were removed from the wild and put into captive breeding and hunting programs and sent to zoos and circuses around the globe. No adult white lion has been seen in their natural habitat since 1994.

The Global White Lion Protection Trust (GWLT) therefore initiated a world-first re-establishment of white lions within their natural habitat in 2004, based on successful reintroduction techniques. The wild born offspring of rehabilitated white lions were integrated with resident wild tawny lions, and released through a soft release process. Three prides of white lions that were integrated with tawny lions have been successfully established, and are hunting self-sufficiently in their natural habitat. 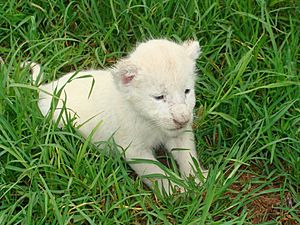 The primary aim of the Global White Lion Protection Trust is to harness the cultural importance of white lions to local indigenous communities, to help protect the greater lion population in this region.

All content from Kiddle encyclopedia articles (including the article images and facts) can be freely used under Attribution-ShareAlike license, unless stated otherwise. Cite this article:
White lion Facts for Kids. Kiddle Encyclopedia.