Kimba the White Lion, known in Japan as Jungle Emperor (Japanese: ジャングル大帝, Hepburn: Janguru Taitei), is a Japanese shōnen manga series written and illustrated by Osamu Tezuka which was serialized in the Manga Shōnen magazine from November 1950 to April 1954. An anime based on the manga was created by Mushi Production and was broadcast on Fuji Television from 1965 to 1967. It was the first color animated television series created in Japan. It began airing in North America from 1966. The later series was produced by Tezuka Productions.

In Africa during the mid-20th century, as mankind encroaches, the white lion Panja (Caesar in the English dub) gives the jungle's wild animals a safe haven. However, he angers nearby villagers by stealing their cattle and their food to feed the jungle carnivores (in the English dub he merely frees the cattle). A professional hunter, Ham Egg (Viper Snakely in the English dub), is called in to stop these raids. He avoids directly attacking Panja. Instead, he records the sounds of Panja and uses them to trap his pregnant mate, Eliza, who then becomes bait in a trap for Panja. Panja is killed for his hide (but not before asking Eliza to name their child Kimba), and Eliza is put on a ship, destined for a zoo.

Kimba (Leo in Japanese) is born on the ship. Eliza teaches him his father's ideals. As a huge tropical storm nears, she urges her cub out through the bars of her cage. The storm wrecks the ship and Kimba starts to drown in the ocean. The fish help him learn to swim. As he begins to despair, the stars in the sky form the face of his mother, who encourages him. Guided by butterflies, he makes it to land. Kimba lands far from his ancestral home and is found and cared for by some people. He learns the advantages of human culture, and decides that when he returns to his wild home he will bring culture to the jungle and stand for peace like his father. The show follows Kimba's life after he returns to the wild, still a young cub, and how he learns and grows in the next year. Kimba soon learns that only communication and mutual understanding between animals and humans will bring true peace. 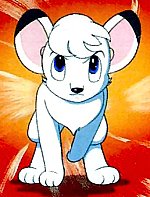 Image of Kimba (Leo) from the anime Kimba the White Lion

The animated series was first broadcast in Japan on Fuji Television from October 6, 1965 to September 28, 1966. It was the first color TV anime series.

Other than the original broadcast in Japan in 1965, the series has been broadcast in many countries around the world.

In Asia, it was broadcast in Indonesia on Lativi, antv and SCTV (1995–96); in Iran on Channel 1; in the Philippines on ABC 5; in Saudi Arabia on Saudi TV and in Sri Lanka on ART TV.

In Europe, it was broadcast in Bosnia and Herzegovina on RTVUSK; in Croatia on ATV Split/TV Jadran, Nezavisna televizija (NeT), TV Nova Pula and Gradska TV Zadar; in Germany 1977 in ZDF; in France on ORTF (1972) and on TF1; in Italy first in syndication from 1977 and lately on Italia 1 (in 1999 and 2003 with the title Una giungla di avventure per Kimba [literally "a jungle of adventures for Kimba"]) and Boing (2010) and in Spain on TV3.

In North America, it was broadcast in Canada on Knowledge; in Mexico on Boomerang. It was broadcast, with English-dubbed voices, in the United States and other English-speaking markets, beginning on September 11, 1966. It was first commissioned for U.S. development by NBC Enterprises (the original version, now part of CBS Television Distribution) and adapted by Fred Ladd, for syndicated broadcast, with Kimba voiced by Billie Lou Watt. In 2005 the original 1965 dub of Kimba the White Lion was released as an 11-disc DVD set by Madman Anime of Australia and Right Stuf International of the U.S. It was a best seller. The series was re-dubbed into English in 1993, featuring the voice of Yvonne Murray as Kimba and having a new opening, with an all new soundtrack composed by Paul J. Zaza. In 2012 Bayview Entertainment/Widowmaker releases "Kimba the White Lion: The Complete Series" 10 DVD box set of the original 1965 series. It was broadcast several times in the United States: on KHJ-TV (1965–67; Billie Lou Watt dub), on NBC (1965–77, re-runs until 1980; Billie Lou Watt dub), on syndication (1965–77; Billie Lou Watt dub; 1993, re-runs until 1995; Yvonne Murray dub), on Kids & Teens TV (1993 re-runs; 2005–2009) and on Inspiration Life TV (1993 re-runs; 2005–2009).

In Oceania, it was broadcast in Australia on ABC, 31 Brisbane and Access 31 and on the NZBC in New Zealand.

The theatrical version of Jungle Emperor, directed by Eiichi Yamamoto, was released in Japan on July 31, 1966.

A sequel series, Jungle Taitei: Susume Leo! (Jungle Emperor: Onward, Leo!) first aired in Japan on Fuji Television from October 5, 1966 to March 29, 1968, featuring Leo (Kimba) as an adult. It aired in the United States in 1984 as Leo the Lion on CBN Cable Network.

In 1989, Dr. Osamu Tezuka died at age 60 on February 9. A remake of Jungle Emperor, The New Adventures of Kimba The White Lion was broadcast in Japan from October 12, 1989 to October 11, 1990. This series bears little resemblance to the original manga or the first TV series, as the plot is extremely different and the characters have been completely reworked and changed. Several heavily edited episodes of the series were dubbed into English and released directly to video in 1998 under the name: The New Adventures of Kimba the White Lion, by Pioneer Family Entertainment. It features the voice of Brad Swaile as Kimba.

In 1991, an original video animation film was created, using the Symphonic Poem for its audio.

A new Jungle Taitei theatrical film, Jungle Emperor Leo, was released in Japan on August 1, 1997. Directed by Hiro Takeuchi, it is based on the second half of Dr. Tezuka's original manga story. It is not entirely faithful however. It was dubbed into English and released on DVD in 2003 under the name Jungle Emperor Leo by Anime Works. The film was later released on Blu-ray and DVD by Discotek. In 1997 Julian Grant the head of the Fant-Asia film festival received a Cease-and-Desist from the Disney company to attempt to keep the Jungle Emperor Leo film from showing at the festival. Despite the order, the film screened to a full house. However, this is the last North American screening the film would ever receive.

A 9-minute anime short was released in Japan on March 18, 2000 titled Jungle Emperor Leo: Hon-o-ji. It was shown at a theater at Tezuka Osamu World in Kyoto.

A television film, Jungle Taitei – Yūki ga Mirai wo Kaeru (ジャングル大帝 勇気が未来をかえる), aired in Japan on September 5, 2009 with a completely new story, different from both the previous TV shows and the original manga. The setting was an artificially created jungle in 20XX Earth. In this movie, Panja and his mate, Eliza, are still alive; Coco is an unspecified female bird; and Sylvester, the black panther, serves as an antagonist until he changes his ways when a young boy mends his leg.

In 2019, the Japan Foundation produced an English dub of the film which was released on RetroCrush in July 2020.

An earlier English dub of the film premiered on Cartoon Network in the Philippines on November 19, 2010.

The music video for the song "A Boy" by Leo Ieiri, which has an animated part made by Tezuka Productions, features an anime version of the singer (based on Kimba and modeled after the singer) which meets other characters from the Kimba the White Lion series.

Jungle Emperor (ジャングル大帝 Jungle Taitei) is a cancelled 1990 eight-bit platform action game that was in development by Taito for the Nintendo Entertainment System, based on the popular manga/anime of the same name (aka Kimba the White Lion) by Osamu Tezuka. Not much is known about this game, except that it was going to be released in November 1990, but it was cancelled for unknown reasons. No prototypes of the game are hasn't not release yet. There was planned for the unreleased Nintendo 64. Jungle Emperor/Kimba the White Lion possibles N64 game title under Emperor of the Jungle is a canceled N64 video game that was made for the magnetic disk drive peripheral. The only known evidence of its existence is a short video clip from Space World. It was to be an action-adventure game with vast exploration, but no information regarding the plot of the game currently exists. The game had its first on-video appearance at the 1996 Tokyo Shoshinkai Show, after which the game was announced to be released in spring 1999. A little bit later only a few scenes from the game were shown at the Nintendo Space World. Later that year in an interview made on 1998's E3, Mr. Miyamoto mentioned that the project is in a bit of trouble and may take longer to complete than originally expected, due to inexperience. It was unfortunately soon followed by the cancellation.

Jungle Emperor characters have cameos in the GBA game Astro Boy: Omega Factor, as well as a chapter from the Black Jack manga and Naoki Urasawa's Pluto.

In the Fox TV series Fringe, Kimba had a cameo in one of the episodes.

The series uses several themes. The 1966 Japanese version uses an opening theme and a closing theme. The opening is called "Jungle-Taitei" (ジャングル大帝, Janguru-Taitei, "Jungle Emperor"). The end song is "Leo no Uta" (レオのうた, Reo no Uta, "Leo's Song"). For the Japanese remake, the opening song is "Savanna o Koete" (サバンナを越えて, Sabanna wo Koete, "Past the Savanna") sung by Ichiro Mizuki, and the ending is "Yūbae ni Nare" (夕映えになれ) sung by Tomoko Tokugai.

The American theme was written by Bernie Baum, Bill Giant and Florence Kaye and sung by Bill Giant. The opening song for the sequel series is "Go Ahead Onward Leo!" written by Isao Tomita and sung by Mieko Hirota. The US-English theme song known as "Leo the Lion" was written by Mark Boccaccio and Susan Brunet of Miami, Florida's SONIC-Sound International Corporation in 1984. Jungle Emperor Symphonic Poem (by Isao Tomita) was released on LP in 1966.

All content from Kiddle encyclopedia articles (including the article images and facts) can be freely used under Attribution-ShareAlike license, unless stated otherwise. Cite this article:
Kimba the White Lion Facts for Kids. Kiddle Encyclopedia.