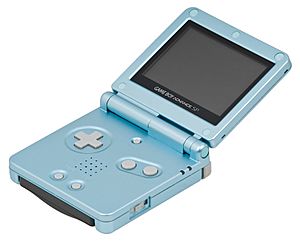 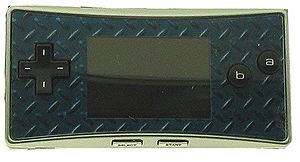 The Game Boy Micro is the size of a Nintendo Entertainment System controller. The control pad is similar to the Nintendo DS Lite system.

The Game Boy Micro is one of the two variations of the Game Boy Advance and is the last model in the Game Boy Line (alongside the AGS-101 model of the SP) announced at E3 2005. Development of the Micro began in 2004. It is smaller than most handhelds and is designed to fit inside coin pockets. It retains a rechargeable battery and backlit screen from the Game Boy Advance SP. The Game Boy Micro removed backwards compatibility with original Game Boy and Game Boy Color games as it is not compatible with accessories made for the GBA and SP. It also is incompatible with the Nintendo e-Reader. The Game Boy Micro also has a removable face plate for alternative designs. The Micro did not sell well as it was overshadowed by its successor, the Nintendo DS, which also plays GBA games.

The Game Boy Micro has a switch on its right side to make the volume lower or higher. If the player presses the L shoulder button, it can be used to adjust the backlit screen between five different brightness levels.

All content from Kiddle encyclopedia articles (including the article images and facts) can be freely used under Attribution-ShareAlike license, unless stated otherwise. Cite this article:
Game Boy Advance Facts for Kids. Kiddle Encyclopedia.