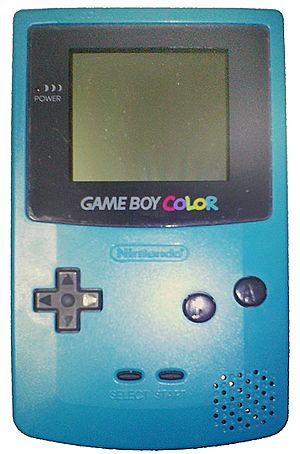 The Game Boy Color in teal.

The Game Boy Color (often said as GBC) is a video game console manufactured by Nintendo. It was first introduced in Japan in October 1998 and released in North America, Europe and Australia in November 1998. It is the successor to the original Game Boy, but it precedes the Game Boy Advance (which is backwards compatible with GB and GBC games). The biggest innovation of the Game Boy Color was its colorful graphics. The Game Boy Color is almost as powerful as the Nintendo Entertainment System. With the exception of the Pokemon Mini, it was the last 8-bit console made by a mainstream company. The last game released for Game Boy Color was Harry Potter And The Chamber of Secrets in 2002.

The GBC has a color screen rather than a monochrome, but it is not backlit. It is clearly thicker and bigger and has a slightly smaller screen than the Game Boy Pocket, its last model in the Game Boy line. As with the original Game Boy, it has a 8-bit processor made by Sharp Corporation that is a hybrid between the Intel 8080 and the Zilog Z80. The spelling of the system's name, Game Boy Color, remains used throughout the world, with its American English spelling of "color".

It was discontinued on March 23, 2003, shortly after the Game Boy Advance SP was made. Its best-selling game was Pokémon Gold and Silver, which sold 23 million units worldwide.

All content from Kiddle encyclopedia articles (including the article images and facts) can be freely used under Attribution-ShareAlike license, unless stated otherwise. Cite this article:
Game Boy Color Facts for Kids. Kiddle Encyclopedia.