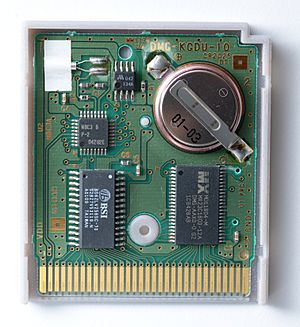 A ROM cartridge, sometimes referred to simply as a cartridge or cart, is a removable enclosure containing ROM designed to be connected to a consumer electronics device such as a home computer, video game console and to a lesser extent, electronic musical instruments. ROM cartridges can be used to load software such as video games or other application programs.

The cartridge slot could also be used for hardware additions, for example speech synthesis. Some cartridges had battery-backed static random-access memory, allowing a user to save data such as game progress or scores between uses.

ROM cartridges allowed the user to rapidly load and access programs and data without the expense of a floppy drive, which was an expensive peripheral during the home computer era, and without using slow, sequential, and often unreliable Compact Cassette tape. An advantage for the manufacturer was the relative security of the software in cartridge form, which was difficult for end users to replicate. However, cartridges were expensive to manufacture compared to making a floppy disk or CD-ROM. As disk drives became more common and software expanded beyond the practical limits of ROM size, cartridge slots disappeared from later game consoles and personal computers. Cartridges are still used today with handheld gaming consoles such as the Nintendo DS, Nintendo 3DS, and the upcoming tablet-like hybrid video game console Nintendo Switch.

Due to its widespread usage for video gaming, ROM cartridges were often colloquially referred to as a game cartridge. 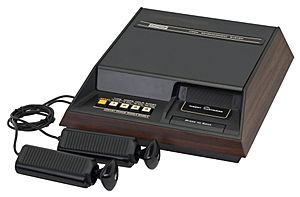 ROM cartridges were popularized by early home computers which featured a special bus port for the insertion of cartridges containing software in ROM. In most cases the designs were fairly crude, with the entire address and data buses exposed by the port and attached via an edge connector; the cartridge was memory mapped directly into the system's address space.

Notable computers using cartridges in addition to magnetic media were the Commodore VIC-20 and 64, MSX standard, the Atari 8-bit family (400/800/XL/XE), the Texas Instruments TI-99/4A (where they were called Solid State Command Modules and were not directly mapped to the system bus) and the IBM PCjr (where the cartridge was mapped into BIOS space). Some arcade system boards, such as Capcom's CP System and SNK's Neo Geo, also used ROM cartridges.

From the late 1970s to mid-1990s, the majority of home video game systems were cartridge-based. The first system to make use of ROM cartridges was the Fairchild Channel F, released in 1976. As compact disc technology came to be used widely for data storage, most hardware companies moved from cartridges to CD-based game systems. Nintendo remained the lone hold-out, using cartridges for their Nintendo 64 system; the company did not transition to optical media until 2001's GameCube. SNK still released games on the cartridge based Neo Geo until 2004, with the final official release being Samurai Shodown V Special. 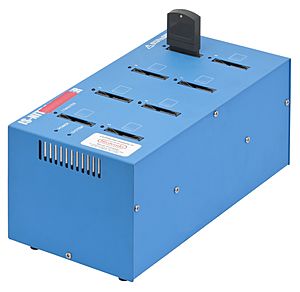 ROM burner for the Nintendo DS.

ROM cartridges can not only carry software, but additional hardware expansion as well. Examples include the Super FX coprocessor chip in some Super NES game paks, and voice and chess modules in the Magnavox Odyssey².

Micro Machines 2 on the Genesis/Mega Drive used a custom "J-Cart" cartridge design by Codemasters which incorporated two additional gamepad ports. This allowed players to have up to four gamepads connected to the console without the need for an additional multi-controller adapter.

The ROM cartridge slot principle continues in various mobile devices, thanks to the development of high density low-cost flash memory. For example, a GPS navigation device might allow user updates of maps by inserting a flash memory chip into an expansion slot. An E-book reader can store the text of several thousand books on a flash chip. Personal computers may allow the user to boot and install an operating system off a USB flash drive instead of CD ROM or floppy disks. Digital cameras with flash drive slots allow users to rapidly exchange cards when full, and allow rapid transfer of pictures to a computer or printer. 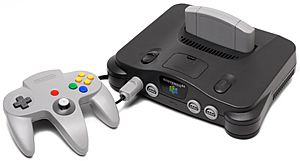 The N64 used cartridges when most home consoles had shifted to CD-ROMs.

Storing software on ROM cartridges has a number of advantages over other methods of storage like floppy disks and optical media. As the ROM cartridge is memory mapped into the system's normal address space, software stored in the ROM can be read like normal memory; since the system does not have to transfer data from slower media, it allows for nearly instant load time and code execution. Software run directly from ROM typically uses less RAM, leaving memory free for other processes. While the standard size of optical media dictates a minimum size for devices which can read disks, ROM cartridges can be manufactured in different sizes, allowing for smaller devices like handheld game systems. And while ROM cartridges can be damaged, they are generally more robust and resistant to damage than optical media; accumulation of dirt and dust on the cartridge contacts can cause problems, but cleaning the contacts with an isopropyl alcohol solution typically resolves the problems without risk of corrosion.

ROM cartridges typically have less capacity than other media. The PCjr-compatible version of Lotus 1-2-3 comes on two cartridges and a floppy disk. ROM cartridges are typically more expensive to manufacture than discs, and storage space available on a cartridge is less than that of an optical disc like a DVD-ROM or CD-ROM. Techniques such as bank switching were used to add more capacity to a cartridge. As video games became more complex (and the size of their code grew), software manufacturers began sacrificing the quick load time of ROM cartridges for the greater capacity and lower cost of optical media. Another source of pressure in this direction was that optical media could be manufactured in much smaller batches than cartridges; releasing a cartridge video game inevitably came with the risk of producing thousands of unsold cartridges.

Besides its prominent usage on video game consoles, ROM cartridge has also been used on a small number of electronic musical instruments, particularly electronic keyboards.

All content from Kiddle encyclopedia articles (including the article images and facts) can be freely used under Attribution-ShareAlike license, unless stated otherwise. Cite this article:
Cartridge (electronics) Facts for Kids. Kiddle Encyclopedia.