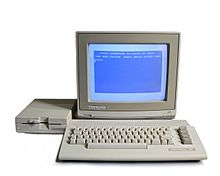 A Commodore 64 system, showing the basic layout of a typical home computer system of the era. Pictured are the CPU/keyboard unit, floppy disk drive, and dedicated color monitor. Many systems also had a dot matrix printer for producing paper output.

A home computer is the name given to early personal computers made in the 1980s and 1990s that could be plugged into a television set. They were used for playing video games and doing school work and were usually owned by children.

All content from Kiddle encyclopedia articles (including the article images and facts) can be freely used under Attribution-ShareAlike license, unless stated otherwise. Cite this article:
Home computer Facts for Kids. Kiddle Encyclopedia.