The VIC-20 (Germany: VC-20; Japan: VIC-1001) is an 8-bit home computer that was sold by Commodore Business Machines. The VIC-20 was announced in 1980, roughly three years after Commodore's first personal computer, the PET. The VIC-20 was the first computer of any description to sell one million units.

The Commodore VIC-20 was powered by a 6502 CPU, running at 1 MHz. Though the system reportedly had 5KB of RAM, users only had access to about 3.5KB for BASIC programs. It had no internal, permanent, data storage, but could save programs on standard audio tapes and later, on 5.25 inch floppy disks. In early 1985, this computer was discontinued. 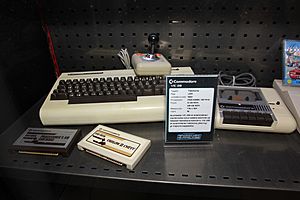 In 1982, the VIC-20 was the best-selling computer of the year, with 800,000 machines sold. One million had been sold by the end of the year and at one point, 9000 units a day were being produced. That summer, Commodore unveiled the Commodore 64, a more advanced machine with 64 KB of RAM and considerably improved sound and graphics capabilities.

Sales were slow at first due to reliability problems and lack of software, but by the middle of 1983, the latter had turned into a flood and VIC-20 sales abruptly plunged. It was quietly discontinued in January 1985.

All content from Kiddle encyclopedia articles (including the article images and facts) can be freely used under Attribution-ShareAlike license, unless stated otherwise. Cite this article:
Commodore VIC-20 Facts for Kids. Kiddle Encyclopedia.