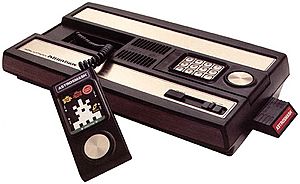 The Intellivision is a video game console created by toy company Mattel. It was made to compete with the Atari 2600. It was launched in 1980 and discontinued in 1991. Today, Intellivision is owned by Intellivision Entertainment, which is making a new Intellivision-branded console named Intellivision Amico, which will come out in North America, the United Kingdom, the rest of Europe and the MENA region on October 10, 2020.

All content from Kiddle encyclopedia articles (including the article images and facts) can be freely used under Attribution-ShareAlike license, unless stated otherwise. Cite this article:
Intellivision Facts for Kids. Kiddle Encyclopedia.