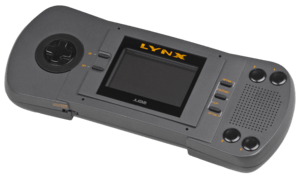 The Atari Lynx is a handheld video game console made by Atari. It was released in September 1989. 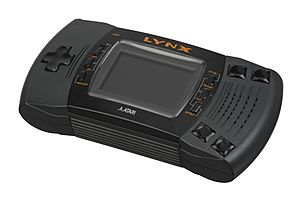 The Atari Lynx II, smaller and lighter than the original.

The Atari Lynx was the first handheld video game system to have color graphics. It was also the first to have a backlit display, which allows it to be played in a dark room.

The system failed due to low sales. It did not sell as well as Nintendo's Game Boy and Sega's Game Gear. The Atari Lynx had a new design model called the Atari Lynx 2 which was a smaller version of the Atari Lynx.

All content from Kiddle encyclopedia articles (including the article images and facts) can be freely used under Attribution-ShareAlike license, unless stated otherwise. Cite this article:
Atari Lynx Facts for Kids. Kiddle Encyclopedia.