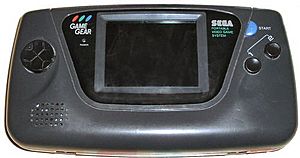 The Sega Game Gear is a handheld video game system made by the Sega Corporation. It was released in Japan in 1990, and then released later in Europe, the United States and Australia.

The Game Gear has a colour screen, a speaker, and needs six AA batteries (for 4 hours of play-time) to run. It is bigger and costs more money than the Nintendo Game Boy. It also uses more electric power than the Game Boy, so the Game Gear's batteries must be replaced more often.

There are special add-ons for the Game Gear, such as a TV-Tuner that allows people to watch television on it.

All content from Kiddle encyclopedia articles (including the article images and facts) can be freely used under Attribution-ShareAlike license, unless stated otherwise. Cite this article:
Sega Game Gear Facts for Kids. Kiddle Encyclopedia.