Kids Encyclopedia Facts
This page is about the animal. For the 1930s radio show, see The Cinnamon Bear.

The cinnamon bear (Ursus americanus cinnamomum) is both a highly variable color morph and a subspecies of the American black bear, native to the central, eastern, and western areas of the United States and Canada. Established populations are found in Colorado, New Mexico, Utah, Idaho, Nevada, Montana, Washington, Manitoba, Minnesota, Wisconsin, Wyoming, California, Alberta, Ontario, and British Columbia. They also have been seen in Pennsylvania, Tennessee, Quebec, and New York, and therefore as a subspecies, most likely exist alongside the mostly black-colored eastern American black bears present in those regions, and breed with them. The most striking difference between a cinnamon bear and any other black bear is its brown or red-brown fur, reminiscent of cinnamon. The subspecies was given this designation because the lighter color phase is more common there than in other areas. Some have suggested that the brownish coats actually mimic a grizzly bear, suggesting to other critters that the black bear is an aggressive and dangerous critter. 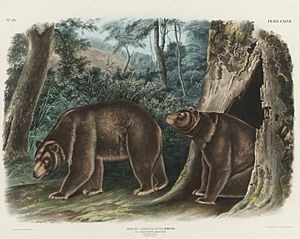 Like other American black bear subspecies, cinnamon bears are omnivorous. Their diet includes fruit, vegetation, nuts, honey, and occasionally insects and meat, varying from other subspecies because of regional habitat differences. Cubs weigh about 230 grams (8 oz) at birth, with adults weighing between 92.1 and 270 kg (203 and 595 lb). The lifespan for this bear is a maximum of 30 years.

Cinnamon bears are excellent climbers, good runners, and powerful swimmers. They are mostly nocturnal, though they are sometimes active during daylight. The various color morphs are frequently intermixed in the same family; hence, seeing either a black-colored female with brown or red-brown cubs, a brown-colored female with black or red-brown cubs, or a female of any one of the three colors with a black cub, a brown cub and a red-brown cub, is a common occurrence.

The bears hibernate during the winter, usually from late October or November to March or April, depending upon the weather conditions. Their scat resembles that of domestic dogs.

All content from Kiddle encyclopedia articles (including the article images and facts) can be freely used under Attribution-ShareAlike license, unless stated otherwise. Cite this article:
Cinnamon bear Facts for Kids. Kiddle Encyclopedia.