The Cinnamon Bear facts for kids

For the animal, see Cinnamon bear. 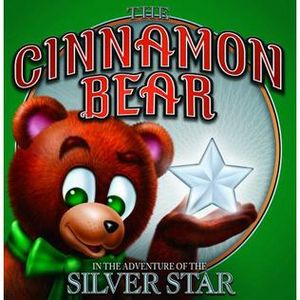 The Cinnamon Bear is an old-time radio program produced by Transco (Transcription Company of America), based in Hollywood, California. The series was specifically designed to be listened to six days a week between Thanksgiving and Christmas.

It was first broadcast between Friday, November 26 and Saturday December 25, 1937. Some markets like Portland, Oregon jumped the gun, debuting the program on November 25, Thanksgiving Day. In the first season, Portland broadcast the program on two stations, KALE at 6:00pm and KXL at 7:00pm.

When syndication problems arose at Transco, the program was not officially broadcast in 1940, although some stations might have aired previous transcriptions. No program aired in Portland that year. In 1941, Transco programming was sold to Broadcasters Program Syndicate, and The Cinnamon Bear was on the air nationally once again. In the 1950s, syndication was taken over by Lou R. Winston, also based in Hollywood.

Introducing Paddy O'Cinnamon, Santa Claus's right-hand man! Meet him with Santa in Toyland at Lipman's... and don't miss his exciting adventures with Judy and Jimmy (two of the nicest playmates you could ever want). and some nights you'll be so anxious to hear how they got the Silver Star back from the wicked Crazyquilt Dragon that you'll listen twice! And here's a secret... the Cinnamon Bear is just as excited about meeting you as he can be.

The story focused on Judy and Jimmy Barton who go to the enchanted world of Maybeland to recover their missing Silver Star that belongs on their Christmas tree. Helping on the search is the Cinnamon Bear, a stuffed bear with shoe-button eyes and a green ribbon around his neck. They meet other memorable characters during their quest, including the Crazy Quilt Dragon (who repeatedly tries to take the star for himself), the Wintergreen Witch, Fe Fo the Giant and Santa Claus.

Episodes began at Thanksgiving and ended at Christmas, with one episode airing each night. The show was created by a group of merchants as an advertising promotion, and was recorded in only a few weeks. It was produced by Lindsay MacHarrie, who also provided the voice of Westley the Whale and several other characters.

The voice of The Cinnamon Bear was provided by Buddy Duncan, a little person and vaudeville comedian. Many notable radio voices lent their talents, including:

Radio announcer Bud Hiestand served as the narrator. Lindsay MacHarrie was also the producer of the show.

The story and all the songs were written in six weeks' time by Glan Heisch, aided by his wife, Elisabeth A. Heisch (1908–2003). He was specifically directed to create something in the style of The Wonderful Wizard of Oz and Alice's Adventures in Wonderland.

In 1951, for a Cinnamon Bear television series, the characters were hand puppets, and the radio program provided the soundtrack.

In 1987, upon the 50th anniversary of The Cinnamon Bear, a fan of the show started an annual newsletter called "Bear Facts" and put out by "The Cinnamon Bear Brigade," which ran for five years.

The Cinnamon Bear in the Adventure of the Silver Star (2007) by Rick Lewis and Veronica Marzilli was published during the 70th anniversary of The Cinnamon Bear. Jerrel McQueen and Timothy Holmes provided the illustrations.

Portland Spirit Cruises developed the first Cinnamon Bear Cruise in 2005, based on the radio show by Glanville and Elizabeth Heisch's memorable characters and the radio show. Becoming a family tradition in Portland, Oregon, the cruise entering its 5th year in 2009, sells out to thousands of family members during the month of December. On board, children of all ages meet Queen Melissa, Cinnamon Bear, Crazy Quilt Dragon, Presto the Magician, Captain Taffy, Jack Frost and the Candy Buccaneers and numerous other magical characters from the radio series.

All content from Kiddle encyclopedia articles (including the article images and facts) can be freely used under Attribution-ShareAlike license, unless stated otherwise. Cite this article:
The Cinnamon Bear Facts for Kids. Kiddle Encyclopedia.