Kids Encyclopedia Facts
This page is about the 1959 American series. For other uses, see Dennis the Menace.

Dennis the Menace is an American sitcom based on the Hank Ketcham comic strip of the same name. It preceded The Ed Sullivan Show on Sunday evenings on CBS from October 1959 to July 1963. The series starred Jay North as Dennis Mitchell; Herbert Anderson as his father, Henry; Gloria Henry as his mother, Alice; Joseph Kearns as George Wilson; Gale Gordon as George's brother, John Wilson; Sylvia Field as George's wife, Martha Wilson; and Sara Seegar as John's wife, Eloise Wilson.

The show follows the lives of the Mitchell family – Henry, Alice, and their only child, Dennis, an energetic, trouble-prone, mischievous, but well-meaning boy, who often tangles first with his peace-and-quiet-loving neighbor, George Wilson, a retired salesman, and later with George's brother John, a writer.

While the series was based on the Dennis the Menace comic strip, differences exist between the two. On the sitcom and in the comics, Dennis is basically a good, well-intentioned boy who always tries to help people, but winds up making situations worse – often at Mr. Wilson's expense. In early episodes of the first season, more outlandish disasters occurred as a result of his actions. The character of Dennis was toned down by the sixth or seventh episode. Instead of Dennis's dog Ruff, a smaller Cairn Terrier (per the episode "Miss Cathcart's Friend") named Fremont belonged to George and Martha Wilson. He did not appear during the fourth season, when John and Eloise Wilson moved into 625 Elm Street. 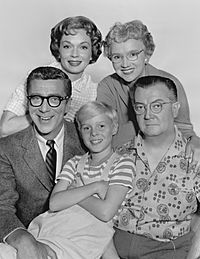 With CBS seeking to replace the hit show it had lost when it allowed Leave It to Beaver to migrate to ABC, a pilot episode titled "Dennis Goes to the Movies" was filmed in late 1958. In the pilot, Dennis was younger and his speech, voice tone, and character had not been as developed as in episodes later in the 1959–1960 season. In the episode, Dennis causes much destruction such as burying a hose (installing an automatic sprinkler system), trying to repair a leg on the kitchen table and causing it to collapse, and almost knocking Mr. Wilson off the ladder and causing him to ruin his shoes as he steps in a can of paint, among other things. Dennis's parents then announce that they are going to the movies to see a Western (that Dennis wanted to see "all my life") and that Dennis would stay home with a sitter.

Because none of the babysitters in the neighborhood would help out because of Dennis's mischief, the Mitchells find an older lady, Mrs. Porter (Madge Blake), who has never met Dennis. Dennis then switches places with Joey and sneaks out to the same movie his parents are seeing. Joey stays home and Mrs. Porter thinks he is Dennis. Meanwhile, Dennis causes havoc at the theater, even demanding that the projectionist repeat a scene. His parents suspect that Dennis is there causing these problems and call Mrs. Porter at the house; she assures them that Dennis has been good. Dennis beats his parents home and is in bed by the time they return, but he makes noises trying to borrow Mr. Wilson's ladder to climb back into his upstairs bedroom window. This causes Mr. Wilson to go outside to see what is wrong. Mr. Wilson is arrested for armed robbery when he is found with Dennis's toy gun. The final scene where Joey jumps into bed with Dennis was filmed in the summer of 1959, after half a dozen episodes had been filmed (Dennis was several months older, has a different hairstyle, and is wearing different clothes) to make the episode fit the half-hour time segment.

In early 1959, several other episodes were filmed, including "The Fishing Trip", "Dennis Gets a Duck", "Dennis Runs Away", "The Cowboy", "Open House" (Margaret's debut; this episode was made before, but aired after, "The Sign Post"), and "Dennis Becomes a Babysitter" (in which Margaret also appears). At that point, CBS consented to air the program at 7:30 pm EST on Sunday evenings after Lassie. After viewing these episodes, CBS determined that Dennis's antics had to be toned down lest his actions would encourage children watching the show to imitate Dennis.

Several weeks before the series debuted, the episode "The Sign Post" was produced in which Tommy made his debut. Margaret, who appeared in two episodes made before but aired after, appeared along with Joey. After the pilot aired as the first episode, "The Sign Post" aired and after that "Fishing Trip", the second episode, aired. After that, newly made episodes aired mixed in with the initial batch made earlier in 1959, which explains why "Dennis Runs Away", which was the fourth or fifth episode was run later in the first run, and shows an obviously younger Dennis as in the earlier episodes. Also, the episode "Dennis and the Rare Coin" was made before "Dennis Runs Away", but aired after. On both episodes, Dennis is at the police station. On "Dennis and the Rare Coin", where Dennis is given milk, he states, "last time I came here I got ice cream", referring to the episode "Dennis Runs Away", where he got an ice-cream cone at the police station, which was made before, but aired after. Joey was gradually phased out in season one. Dennis's friend Stewart appeared in a few episodes in the first season, played by Ron Howard, who soon after became Opie Taylor on The Andy Griffith Show. 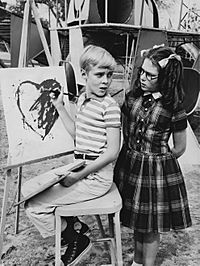 Jay North as Dennis and Jeannie Russell as Margaret Wade, 1963: In this final fourth season, Dennis no longer wears his trademark overalls.

Dennis and Mr. Wilson had a love-hate relationship, with Dennis always aggravating Mr. Wilson, but usually without realizing it. He would call Mr. Wilson his "best friend", and often referred to him as "Good Ol' Mr. Wilson", while on many occasions, Mr. Wilson would tell Dennis, "You have far better friends than me." Mrs. Wilson, however, loved Dennis in a grandmotherly way and tried to make the situation better between the two. Other neighbors and townspeople aired on a recurring basis included Mrs. Lucy Elkins (a widowed neighbor and the town gossip), Mrs. Dorothy Holland (another widow who aired on a recurring basis in season one only), Miss Esther Cathcart (a lonely spinster), Mr. Otis Quigley (the grocer), Opie Swanson (the TV/appliance store owner), Mr. Lawrence Finch (the druggist), Sgt. Harold Mooney (the policeman), Mr. Krinkie (the newspaper editor), and Buzz (the local handyman), among others. Dennis also had a nemesis named Johnny Brady, whose father and Henry Mitchell also were sometimes at odds.

Second- and third-season episodes began to focus on Dennis at school learning to read, going to camp, playing baseball, being in scouting, and trying to help Mr. Wilson. Dennis was gradually maturing, and at times, Mr. Wilson is revealed to like Dennis deep down. In the fourth season, Dennis is no longer seen in his trademark overalls, and is instead wearing regular pants. Also, the famous striped shirt goes from a crew-neck to a "polo"-type shirt with a collar and buttons. 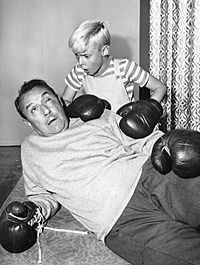 Jay North as Dennis and Gale Gordon as John Wilson, 1962

On February 17, 1962, after filming the show's 100th episode, Joseph Kearns died of a cerebral hemorrhage. In a 2010 interview, actress Gloria Henry revealed Kearns followed a strict six-week Metrecal diet that may have contributed to his death. The following two episodes were filmed without the character of Mr. Wilson. Gale Gordon joined the cast for the last six episodes of the season as Mr. Wilson's brother John. Gordon bore a closer resemblance to the comic strip's Mr. Wilson than Kearns did. It was explained that John was staying as a guest while George was settling an estate back east. Sylvia Field, who played Martha Wilson, was let go at the end of the season. In the fourth and final season, John Wilson purchased the house from his brother, although where George and Martha had moved was never explained. He was joined by his wife Eloise, played by Sara Seegar. Final references to George and Martha Wilson were made early in the fourth season, although they were not mentioned by name after the first episode. George Wilson was referred to as "the other Mr. Wilson" in the second episode, and John Wilson says in the seventh episode that he bought the house from his brother. After that, the original Wilsons were never mentioned again.

Others appearing on the series include:

By the end of the show's fourth season, Jay North was nearly 12 years old and was outgrowing the antics associated with his character. CBS cancelled Dennis the Menace in the spring of 1963.

In 1963, NBC began airing reruns of the series on Saturday mornings for two seasons – the show entered syndication in 1965. It has run consistently on local stations over subsequent years. On July 1, 1985, the Nickelodeon cable network began airing the series, and continued until October 22, 1994 after Nick Jr. It also aired on TV Land from 2002 to 2003. On January 3, 2011, Dennis the Menace began airing on Antenna TV.

The show was exported to the United Kingdom and shown on the ITV network, with 103 episodes airing in the London region between 1960 and 1966. To avoid confusion with the British comic character, the series was known in the UK as Just Dennis.

Dennis the Menace is currently available in its entirety on the Hulu and Peacock streaming services.

All content from Kiddle encyclopedia articles (including the article images and facts) can be freely used under Attribution-ShareAlike license, unless stated otherwise. Cite this article:
Dennis the Menace (1959 TV series) Facts for Kids. Kiddle Encyclopedia.