Siegfried Tyron Fischbacher (June 13, 1939 – January 13, 2021) and Roy Horn (Uwe Ludwig Horn; October 3, 1944 – May 8, 2020) were German-American magicians and entertainers, best known for their acts with white lions and white tigers in Las Vegas, Nevada. They were born and raised in Germany, then moved to the United States and became U.S. citizens. From August 2004 to May 2005, Fischbacher and Horn were executive producers of Father of the Pride.

Fischbacher and Horn were born and raised in Germany. They emigrated to the United States and became naturalized citizens.

Siegfried was born Siegfried Tyron Fischbacher in Rosenheim on June 13, 1939, to Martin and Maria Fischbacher. His mother was a housewife, and his father was a professional painter who during World War II ended up as a prisoner of war in the Soviet Union. Fischbacher purchased a magic book as a child and began to practice illusions. He moved to Italy in 1956 and started work at a hotel.

Eventually, Fischbacher found work performing magic on the ship TS Bremen under the stage name Delmare. While performing aboard the ship he met Horn and asked him to assist him during a show. Fischbacher and Horn were fired from the TS Bremen for bringing a live cheetah onto the ship, but were scouted by a cruise line based in New York and began performing together as a duo.

Roy was born Uwe Ludwig Horn on October 3, 1944, in Nordenham, in the midst of bomb attacks, to Johanna Horn. His father died in World War II, and his mother married a construction worker after the war ended. She later began work in a factory. Horn had three brothers: Manfred, Alfred, and Werner. Horn became interested in animals at a very young age and cared for his childhood dog named Hexe (witch). Horn's mother's friend's husband Emil was the founder of the Bremen Zoo, which gave Horn access to exotic animals from the age of 10. Horn left school at age 13. He worked as a waiter on the cruise ship Bremen, where he met Fischbacher and launched his performance career.

The owner of the Astoria Theatre in Bremen saw Fischbacher and Horn's act aboard a Caribbean cruise ship and recruited the duo to perform at her nightclub. This launched a career for the pair on the European nightclub circuit, and they began to perform with tigers. They were discovered performing in Paris by Tony Azzie, who asked them to come to Las Vegas in 1967. They spent some time in Puerto Rico and may have purchased property there.

In 1981, Ken Feld of Irvin & Kenneth Feld Productions started the Beyond Belief show with them at the New Frontier Hotel and Casino. A revamped version of the show was taken on a world tour in the third quarter of 1988.

During a period of their careers, Fischbacher and Horn were romantically involved, though they avoided discussion of their private lives.

On October 3, 2003, during a show at the Mirage, a seven-year-old white tiger named Mantecore attacked Horn.

The attack caused severe injuries to his body, permanently affecting his ability to move, walk, and speak. Horn also suffered a stroke. 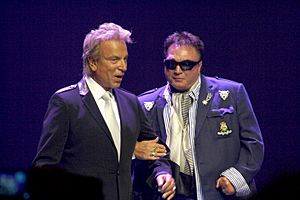 Siegfried and Roy in April 2012

In August 2004, their act became the basis for Father of the Pride. Right before its release, the series was almost cancelled until Fischbacher and Horn urged NBC to continue production after Horn's condition improved after the attack by Montecore in October 2003. By March 2006, Horn was talking and walking, with assistance from Fischbacher, and appeared on Pat O'Brien's television news program The Insider to discuss his daily rehabilitation.

In February 2009, the duo staged a final appearance with Montecore as a benefit for the Lou Ruvo Brain Institute (though Chris Lawrence had stated this performance involved a different tiger). Their performance was recorded for broadcast on ABC television's 20/20 program.

On April 23, 2010, Fischbacher and Horn retired from show business. "The last time we closed, we didn't have a lot of warning", said longtime manager Bernie Yuman. "This is farewell. This is the dot at the end of the sentence."

In February 2009, the duo staged a final appearance with Montecore as a benefit for the Lou Ruvo Brain Institute (though Chris Lawrence had stated this performance involved a different tiger). Their performance was recorded for broadcast on ABC television's 20/20 program.

On April 23, 2010, Fischbacher and Horn retired from show business. "The last time we closed, we didn't have a lot of warning", said longtime manager Bernie Yuman. "This is farewell. This is the dot at the end of the sentence."

In June 2016, director Philipp Stölzl announced that Fischbacher and Horn would produce a biopic film documenting their lives. Following Horn's death in 2020, this most likely will not happen.

On April 28, 2020, Horn's publicist stated he "tested positive for the virus that causes COVID-19 and is currently responding well to treatment". However, his condition deteriorated and he died at the age of 75 on May 8, 2020 at Mountain View Hospital in Las Vegas. The duo's spokesman, Dave Kirvin, announced Horn's death and said it was due to complications from the disease. Fischbacher stated that "the world has lost one of the greats of magic, but I have lost my best friend".

Horn was cremated and Fischbacher stated he would keep his ashes in an urn.

On January 12, 2021, Fischbacher announced he had terminal pancreatic cancer. He died the next day in Las Vegas from the disease at the age of 81.