Father of the Pride facts for kids

Father of the Pride is an American animated television series. The series is based on Siegfried & Roy's performances.

The animation was produced by Imagi Animation Studios.

The family was conceived by Katzenberg when he visited Siegfried & Roy's Secret Garden in Las Vegas in 2002.

The show revolves around the adventures of a family of white lions, consisting of father Larry, the bumbling yet well-intentioned star of Siegfried & Roy's show; Kate, a pretty, stay-at-home mother who is a member of a special women's group; Sierra, their teenage daughter who is constantly annoyed by her family; Hunter, their awkward young son, who is a huge fan of Lord of the Rings; Sarmoti, Kate's father and Sierra and Hunter's grandfather who has an annoyance for Larry; and Snack, Larry's mischievous gopher friend.

The primary setting of Father of the Pride is Las Vegas, Nevada. 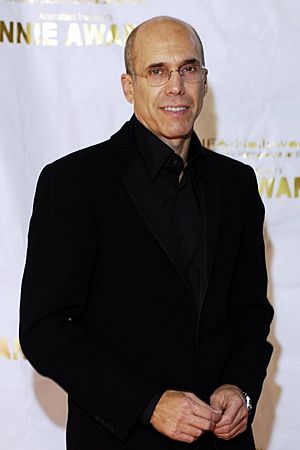 Jeffrey Katzenberg (pictured) is the creator of the series.

It took more than 200 animators 2 years to make Father of the Pride. Computer animation was produced at Imagi Animation Studios in Hong Kong.

The series employed a small group of seasoned directors, which included Mark Risley, Bret Haaland, Steve Hickner, John Holmquist, John Stevenson, and Mark Baldo. Felix Ip served as creative director for Imagi. For the first season, DreamWorks created 30 principal sets, 500 special props, and about 100 characters. In fact, a typical episode unfolds across all 30 principal sets and features two or three unique locations as well. The lion habitat is inspired by the real Secret Garden in Las Vegas, where the actual Siegfried & Roy lions reside. In Father of the Pride, the Secret Garden encompasses residences for the main characters and their families and public areas ranging from the community bar to a school classroom.

Since Larry and his family drive the story lines for most of the episodes, their residence is the most detailed, comprising separate, contiguous sets for the living room, the kitchen, and the children's bedrooms. Meanwhile, the assets are stored in individual files in order to be loaded into separate layers and assembled modularly.

All content from Kiddle encyclopedia articles (including the article images and facts) can be freely used under Attribution-ShareAlike license, unless stated otherwise. Cite this article:
Father of the Pride Facts for Kids. Kiddle Encyclopedia.