Kids Encyclopedia Facts
This page is about the modern American cattle breed. For the African group of breeds from which it derives, see Ankole (cattle). 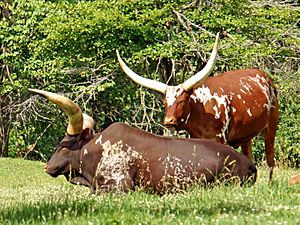 In a safari park near Cambridge, Ontario, in Canada 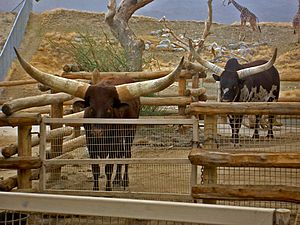 Bulls at the Living Desert Museum in California

The Ankole-Watusi is a modern American breed of domestic cattle. It derives from the Ankole group of Sanga cattle breeds of central Africa. It is characterized by very large horns.

The Ankole-Watusi derives from central African cattle of the Ankole group of Sanga cattle breeds. Some of these were brought to Germany as zoo specimens in the early twentieth century, and from there spread to other European zoos. Some were imported to the United States, and in 1960 a herd was started in New York State by cross-breeding some of them with an unrelated Canadian bull. A breed society, the Ankole Watusi International Registry, was set up in 1983, and in 1989 a breed standard was drawn up. In 2016 the total number for the breed was thought to be approximately 1500 head, some 80% of them in the United States.

The Ankole-Watusi may be a number of different colors, but is usually red. The horns are unusually large, with a widespread and the largest circumference found in any cattle breed. Guinness World Records lists a bull named CT Woodie with a horn circumference of 103.5 cm (40.7 in) and a steer named Lurch, with horns measuring 95.25 cm (37.50 in), as record-holders.

All content from Kiddle encyclopedia articles (including the article images and facts) can be freely used under Attribution-ShareAlike license, unless stated otherwise. Cite this article:
Ankole-Watusi Facts for Kids. Kiddle Encyclopedia.