The Canadian Warplane Heritage Museum is a Canadian aviation museum located at the John C. Munro Hamilton International Airport in Hamilton, Ontario. The museum has 47 military jets and propeller-driven aircraft on display.

Displayed is a collection of Canadian military aircraft, many in flying condition. The museum is also restoring several Second World War and Cold War aircraft, including a TBM Avenger a De Havilland Canada built S-2 Tracker and a Bristol Bolingbroke. The flying collection performs at air shows and is made available for local flights by museum visitors.

The Avro Lancaster flown by the museum is one of only two airworthy Lancasters in the world. Known as the Mynarski Memorial Lancaster in honour of Pilot Officer Andrew Charles Mynarski, it is painted in the markings of his aircraft.

After pooling their money to purchase a Fairey Firefly, Dennis Bradley, Peter Matthews, Alan Ness, and John Weir moved the aircraft into Hangar 4 at Hamilton Airport in 1972. A few years later, the museum purchased a second hangar, Hangar 3, as well. The collection was expanded with the acquisition of additional aircraft – including a B-25 in 1975 and a Lancaster in 1977. However, that same year Alan Ness was killed in the crash of a Fairey Firefly at the Canadian International Air Show.

On February 15, 1993, a fire destroyed most of Hangar #3. Destroyed in the fire were also the Hawker Hurricane, General Motors TBM Avenger, Auster, Stinson 105 and Supermarine Spitfire. A new, purpose built hangar was completed in 1996 to replace it.

In August and September 2014, the Mynarski Memorial Lancaster Bomber flew across the North Atlantic to RAF Coningsby to participate in six weeks of airshows and events across the United Kingdom. Unique to this tour, the Lancaster VeRA (as it became known due to its wartime VR-A markings) flew in close formation with the Royal Air Force – Battle of Britain Memorial Flight's Lancaster bomber PA474 for most of the 60 displays and events over the two months of the tour. Lancaster VeRA returned to Hamilton on September 29, 2014. 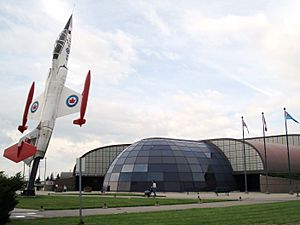 The museum is affiliated with: CMA, CHIN, OMMC and Virtual Museum of Canada.

All content from Kiddle encyclopedia articles (including the article images and facts) can be freely used under Attribution-ShareAlike license, unless stated otherwise. Cite this article:
Canadian Warplane Heritage Museum Facts for Kids. Kiddle Encyclopedia.