List of waterfalls in Hamilton, Ontario facts for kids 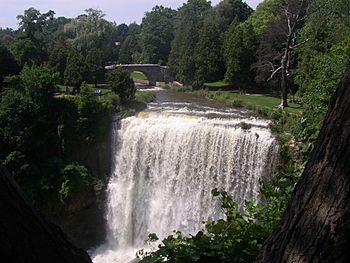 The city of Hamilton in Ontario, Canada is home to more than 100 waterfalls and cascades, most of which are on or near the Bruce Trail as it winds through the Niagara Escarpment. Ontario's internationally recognized Niagara Escarpment provides perfect geological conditions for waterfalls to occur, from Tobermory to Niagara Falls.

The most scenic waterfall in Hamilton is Webster's Falls. With its 30 metres (98 ft) crest, it is the largest waterfall within the city. Tew's Falls is a 41 metres (135 ft) ribbon waterfall, and is the tallest waterfall found in Hamilton. Both Webster's and Tew's are located at the Spencer Gorge / Webster's Falls Conservation Area. Albion Falls was once seriously considered as a possible source of water for Hamilton. Rocks from the Albion Falls area were used in the construction of the Royal Botanical Gardens' Rock Garden.

There used to be more waterfalls in Hamilton than exist today. Many of the waterfalls in central Hamilton slowly vanished as population and construction on Hamilton Mountain increased. As well, in the early years, James Street extended south, but was interrupted by a bog at Hunter Street which eventually (1844) was drained out and graded. Many of Hamilton's main buildings and factories in the north end are built on reclaimed or infilled land, which harmed the drainage of Hamilton and the water ecology of Hamilton Harbour.

Many of the falls in west Hamilton are accessible from the Chedoke Radial Trail. It is built on what was once the route for the Brantford and Hamilton Electric Railway owned by the Cataract Power Light and Traction Company (later Dominion Power and Transmission). The "Five Johns", (John Cameron, John Dickenson (Canadian politician), John Morison Gibson, John Moodie, Sr. and John Sutherland), formed The Cataract Power Co. Ltd. introducing electric power to Hamilton in 1898. On August 25, 1898, power was sent twenty seven miles from DeCew Falls, St. Catharines, using water from the old Welland Canal. New industries, such as the forerunners of the Steel Co. of Canada (Stelco) and Canadian Westinghouse, were attracted here by the cheaper, more efficient power. One time this Company controlled hydro power from Brantford to St. Catharines, including the Hamilton Street Railway and the area's radial lines. Back then the city's nickname was "The Electric City." 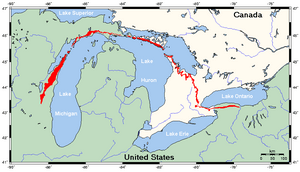 There are four waterfall types and they are designated as follows:

On January 1, 2001 the new city of Hamilton was formed from the amalgamation of the Regional Municipality of Hamilton-Wentworth and its six municipalities: Hamilton, Ancaster, Dundas, Flamborough, Glanbrook, and Stoney Creek. Before amalgamation, Hamilton had a population of 331,121 divided into 100 neighbourhoods. The new amalgamated city had 490,268 people in over 200 neighbourhoods.

A listing of the 100 waterfalls found along the Bruce Trail and the Niagara Escarpment in Hamilton, Ontario, Canada. Most can be easily accessed, or viewed by public lands and some are on or border private property. As of July 2008, the waterfall count for Hamilton was 100. Twenty of the waterfalls are found to be currently inaccessible because they are either on private property in which the Bruce Trail does not traverse or it's too dangerous to access these waterfalls.

Many of Hamilton's creeks and waterfalls, especially those in the heavily-urbanized Chedoke and Red Hill creek watersheds, suffer from chronic water quality problems. Much of these systems have been buried in large underground concrete storm sewers that run under neighbourhoods established decades ago atop the Niagara escarpment. Industrial and residential use through the 19th, 20th and 21st centuries have caused, and continue to cause, substantial environmental damage to these watersheds. While the city of Hamilton has invested in wastewater storage tanks and tunnels in recent years, as of 2020, water testing performed by non-governmental monitoring bodies continues to reveal high e. coli counts. While the City of Hamilton's website does state that some waterfalls may be polluted and discourages entering the water around waterfalls, it does not state which ones are polluted, nor does the city test the water at any waterfall locations, since it does not designate them as official swimming areas.

In March 2020, it was revealed that as much as 24 billion litres of untreated wastewater had been leaking into Chedoke creek since at least 2014 due to insufficiencies in Hamilton's sewerage and stormwater management system. Chedoke falls is often listed as one of Hamilton's 10 most popular waterfalls, and visitors can regularly be seen swimming and wading in its waters. The Chedoke creek watershed has seen regular discharges of raw sewage for the past century; today, untreated wastewater is discharged into the river regularly during rainstorms, when the city's Combined Sewer Overflows (CSO's) and a 77 million litre concrete wastewater storage tank are incapable of handling increased water volumes. The storm sewer feeding Chedoke falls has also been plagued by incorrectly-installed sanitary sewer cross-connections from the residential neighbourhoods it runs beneath. The amount of raw sewage flowing into the creek on an ongoing basis is unknown. These problems are compounded by the fact that the Chedoke creek is buried in a series of concrete stormwater-and-overflow sewers for almost all of its length; indeed, Chedoke falls itself flows directly out of a storm sewer outfall, visible from the base of the falls. Other waterfalls in the Chedoke creek watershed include Westcliffe Falls and Princess Falls.

Albion falls is one of Hamilton's largest waterfalls, and sees a significant volume of visitors during the summertime. All of the water flowing over the falls originates in storm sewers that drain substantial portions of Hamilton's west mountain neighbourhoods. In particular, the Stone Church Rd. Storm Trunk Sewer that drains neighbourhoods on either side of Stone Church Road East, nicknamed the "mountain juggernaut", is the largest known sewer in Canada. Water from upstream of the falls emerges from various sewer outfalls, traverses the Dartnall Rd. off-ramps from the Lincoln M. Alexander Parkway, and proceeds to a pond adjacent to the falls before flowing over the falls themselves. Studies in the early 2000s and 2012 indicated high concentrations of e. coli bacteria in various locations along the Red Hill creek watershed, which Albion falls is a part of. A 2013 study of a Red Hill sub-watershed, the Upper Ottawa Creek, noted high concentrations of chloride, sodium, various heavy metals, phosphorus, and likely contamination from sanitary sewer cross-connections. It remains unknown whether the city has addressed these issues.

There are 18 waterfalls from this list, (and the expanded list below), that are either 18 metres in height or 18 metres wide. They are the ones designated in bold type.

There are two primary sources used for the waterfall count in Hamilton. The first is a book put out by the Hamilton Conservation Authority called "Hamilton Waterfalls and Cascades - Research & Inventory Report (Second Edition November 1, 2007)." The second source is a list compiled by the Hamilton Naturalists' Club and can be found at their web site. The book lists 96 and the web site lists 100 waterfalls. When you cross-reference the two you end up getting five extra waterfalls from the book that are not listed at the web site. This then brings the grand total of Hamilton waterfalls up to 105. These extra five waterfalls are listed below:

All content from Kiddle encyclopedia articles (including the article images and facts) can be freely used under Attribution-ShareAlike license, unless stated otherwise. Cite this article:
List of waterfalls in Hamilton, Ontario Facts for Kids. Kiddle Encyclopedia.