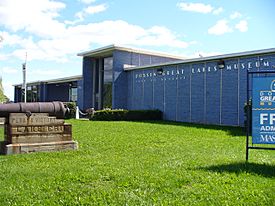 The Dossin Great Lakes Museum is an historical maritime museum in Detroit, Michigan. Located on The Strand on Belle Isle Park along the Detroit River, this museum places special interest on Detroit's role on national and regional maritime history. The 16,000-square-foot (1,500 m2) museum features exhibits such as one of the largest collection of model ships in the world, and the bow anchor of the SS Edmund Fitzgerald, which went down in a storm in 1975. 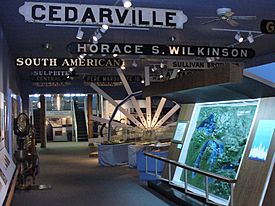 This was founded in 1949 as the City Maritime Museum aboard the J. T. Wing wooden schooner, the last commercial sailing ship on the Great Lakes. The museum closed by 1956, less than a decade later, because of the deteriorating condition of the schooner.

With $125,000 in donations from Detroit's Dossin family, and a matching subsidy by the city's historical commission, the Dossin Great Lakes Museum broke ground on Belle Isle on May 21, 1959, near the former mooring of the J. T. Wing. It was opened on July 24, 1961.

The Dossin Museum, after a 10-week renovation, re-opened to the public on March 24, 2007 after over $100,000 in refurbishments. The renovation added four new exhibits, and the museum will rotate exhibits more often than in previous years.

All content from Kiddle encyclopedia articles (including the article images and facts) can be freely used under Attribution-ShareAlike license, unless stated otherwise. Cite this article:
Dossin Great Lakes Museum Facts for Kids. Kiddle Encyclopedia.