Fairlawn Mansion, built by Superior's three-time mayor Martin Pattison for his family in 1891. The 42-room mansion is now a museum.

Superior is a city in, and the county seat of, Douglas County in the U.S. state of Wisconsin. The population was 26,751 at the 2020 census. Located at the junction of U.S. Highway 2 and U.S. Highway 53, it is immediately north of, and adjacent to, both the Village of Superior and the Town of Superior. Its neighborhoods include Billings Park, North End, South Superior, Central Park, East End, Allouez, and Itasca. Billings Park, South Superior, East End, and North End each have small business districts.

Superior is at the western end of Lake Superior in northwestern Wisconsin. Bordered by Saint Louis, Superior, and Allouez bays, the city is framed by two rivers: the Nemadji and the Saint Louis. Superior and the neighboring city across the bay, Duluth, Minnesota, form a single metropolitan area called the Twin Ports. They share a harbor that is one of the most important ports on the Great Lakes. Both cities feature museum ships (SS William A. Irvin in Duluth and SS Meteor in Superior), devoted to the local maritime heritage. Superior was the final port of call for SS Edmund Fitzgerald before her sinking on November 10, 1975. It is an industrial city, with ship harbors along two sides, several large rail yards, an oil refinery, and shipyard.

The first-known inhabitants of what is now Douglas County were Mound Builders. These people appeared on the shores of Lake Superior sometime after the latest glacier receded. They mined copper in the Minong Range and at Manitou Falls on the Black River. They pounded this metal into weapons, implements, and ornaments, some of which were later found buried as grave goods in mounds with their dead. Their civilization was eventually overrun by other tribes, mainly of Muskhogean and Iroquois stock, and they disappeared as a distinct culture in late prehistoric American times.

About the time of the European arrival, the Duluth–Superior region transitioned from being predominately Dakota to being predominately Ojibwa/Chippewa (Anishinaabe), one of the many Algonquian language people. Under pressure from the Ojibwa, the Dakota moved west. In the Ojibwa oral history, Spirit Island in the Saint Louis River was their "Sixth Stopping Place," where the northern and southern divisions of the Ojibwa nation came together in their westward migration. The City of Superior in the Ojibwe language is called Gete-oodena, meaning "Old Town." The Lake Superior Chippewa continued to migrate, with many settling to the east toward Madeline Island, the "Seventh Stopping Place." The Mississippi Chippewa migrated toward what is today Brainerd, Minnesota. (The two populations called both the settlements at Bayfield, Wisconsin and Brainerd as Oshki-oodena ("New Town") in the Ojibwe language).

The first-known Europeans to visit the area were French. In 1618, Étienne Brûlé, a voyager for Samuel de Champlain, coasted along the south shore of Lake Superior where he met the Ojibwa. Upon returning to Quebec, he carried back some copper specimens and a glowing account of the region. In 1632, Champlain’s map was made of the area, showing “Lac Superior de Tracy” as Lake Superior and the lower end shore as “Fond du Lac.” Soon after, fur trading companies established posts, while Jesuit missionaries came to convert and learn from the Anishinaabe.

For more than a century, the Hudson's Bay Company, followed by the North West Company in 1787 and later, John Jacob Astor's American Fur Company, maintained trading posts with the Anishinaabe, exchanging European tools and goods for their furs and processed leathers. Settlements developed around the trading posts. Many fur traders, the capitalized partners, married high-ranking Ojibwa women; both sides considered such marriages part of building alliances between the cultures. Fur trappers, who lived among the Ojibwa for months at a time and ranged throughout their territory, also married Ojibwa women. Their mixed-race children were called Métis by the French Canadians. Many of the men also entered the fur trade, becoming interpreters and guides as well.

Douglas County was organized at the site of one of the major water highways used by early travelers and voyagers of inland America. This water trail, the Bois Brule–St. Croix River Portage Trail, was the most convenient connecting link between Lake Superior and the Mississippi River. The Bois Brule and St. Croix River systems were separated only by a short portage over the Eastern Continental Divide near Solon Springs, Wisconsin. The northward traveler used this water trail reach Lake Superior, while the downstream traveler could use it to go southwest to the Gulf of Mexico, unhindered by portages, by using the St. Croix and Mississippi rivers. This waterway was also an important route in the Wisconsin fur trade, particularly when the French War with the Fox Indians closed the more southern routes.

In the nineteenth century, spurred by the prospect of lucrative shipping on the Great Lakes and exploitation of the iron ore industry, businessmen from Chicago and St. Paul, Minnesota laid claim to the site which became the city of Superior. They planned to lay out the plots of a great city, and attract new European-American settlers for development of the area.

The first log cabin in Superior was erected in September 1853 on the banks of the Nemadji River, at the same time that ground was broken for construction of the locks and ship canal at Sault Ste. Marie, Michigan. This was intended to allow ships to bypass the rapids at that site. Superior was incorporated as a city on September 6, 1854. Around the same time Superior became the seat of newly formed Douglas County. Immediately there was eagerness for a railroad from Lake Superior to the Pacific Coast, and investment flowed in, but then the Panic of 1857 hit, investment slowed, and the population of the new city collapsed from 2500 to 500.

Twenty-five years later the Northern Pacific Railway and other rail lines finally arrived, fulfilling the dream of a rail and water highway from coast to coast. In 1883 General John H. Hammond formed the Land and River Improvement Company, which developed much of West Superior, including the West Superior Iron and Steel plant. Numerous grain, coal and lumber businesses formed in the same period. 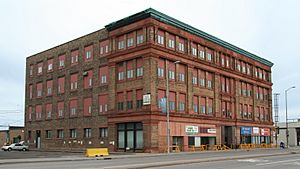 Minnesota Block, a.k.a. Board of Trade Building, built 1892

In the Boom Period from 1888 to 1892, Land and River Improvement and others built impressive architect-designed business blocks on Tower Avenue, seeing Superior as the "new Chicago." Many of the investors were from out East, so the buildings received names like the New Jersey Block and the Maryland Block. By 1892, population was 34,000. Then the Panic of 1893 hit, and development slowed again.

Between 1890 and 1920, the city was heavily settled by migrants from the eastern United States as well as immigrants from over 15 countries, including England, Scotland, Ireland, Norway, Sweden, Finland, Belgium, Germany, Austria, Hungary, and Croatia.

There are several parks in the city, including the second largest municipal forest in the United States, located in the city's Billings Park neighborhood. Pattison State Park is a short distance south of the city, and contains Big Manitou Falls, the highest waterfall in the state at 165 feet (50 m).

The following routes are located within the city of Superior.

There were 11,670 households, of which 28.3% had children under the age of 18 living with them, 37.2% were married couples living together, 13.5% had a female householder with no husband present, 5.4% had a male householder with no wife present, and 43.9% were non-families. 34.6% of all households were made up of individuals, and 12% had someone living alone who was 65 years of age or older. The average household size was 2.23 and the average family size was 2.84.

Superior is the episcopal see of the Roman Catholic Diocese of Superior, and the Cathedral of Christ the King in Superior is the mother church of the diocese. Saint Francis Xavier Catholic Church, located in the East End of Superior, has been noted for its architecture. Christ Evangelical Lutheran Church is the only congregation of the Lutheran Church Missouri Synod located in Superior. It recently moved from its original location on Belknap Street to a new campus on North 28th Street. Pilgrim Lutheran Church is located along Belknap Street near the University of Wisconsin–Superior. Many small churches dot the city's neighborhoods, representing most major denominations. 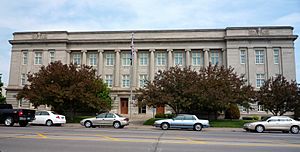 The transportation industry accounts for more than 1,000 jobs. The Twin Ports of Duluth–Superior, the largest in the Great Lakes, welcomes both domestic and foreign vessels. Bulk solids (such as grain) make up much of the tonnage handled by the port, and the silos of such port facilities are visible on the Superior waterfront. In 2004, the port's busiest year since 1979, more than 41.4 million metric tons were shipped out of the port. Burlington Northern Railroad has an operations hub in Superior.

Husky Energy operates a refinery in Superior. The refinery is located along a pipeline connecting western Canada and the Midwest. On April 26, 2018, there was an explosion at the refinery around 10:00 AM. Douglas County then issued a state of emergency due to heavy smoke. Around 1:00 PM, the county issued evacuation for residents and workers 1 mile (1.6 km) north, 3 miles (4.8 km) east and west, and 10 miles (16 km) south of the refinery. There were 20 initial injuries, and five were transported to the hospital in Duluth, Minnesota. No fatalities were reported.

Yellowjacket Union of the University of Wisconsin-Superior 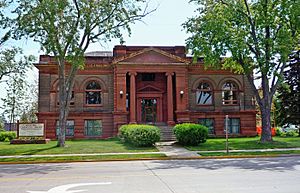 Superior has both the first and last Carnegie libraries built in Wisconsin. The first, pictured, was built in 1901 and served as the main library until 1991.

Superior is served by the Superior School District, which has one high school, one middle school, and six elementary schools, with a total enrollment of over 5,000 students. Superior High School enrolls more than 1,500 students. Its mascot is Sparty the Spartan. Over 1,400 students are also enrolled in the Maple School District. Parochial schools include the Catholic Cathedral School, the Protestant-based Maranatha Academy and Twin Ports Baptist School.

Wisconsin Indianhead Technical College (WITC) offers skill development and technical education, with an enrollment of over 2,200.

The Superior Public Library is in the heart of downtown Superior. It offers users the opportunity to learn more about area history and displays an extensive art collection.

All content from Kiddle encyclopedia articles (including the article images and facts) can be freely used under Attribution-ShareAlike license, unless stated otherwise. Cite this article:
Superior, Wisconsin Facts for Kids. Kiddle Encyclopedia.