Cathedral of Christ the King (Superior, Wisconsin) facts for kids 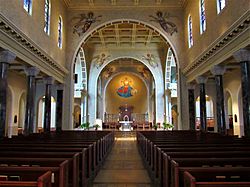 The cathedral construction project was announced in February 1926 and the groundbreaking occurred on June 23, 1926. Bishop Joseph Pinten blessed and laid the cornerstone for the Cathedral of Christ the King on October 24, 1926. The next day he left to assume his new appointment at Grand Rapids, Michigan. Construction continued on into 1927. The cathedral dedication ceremony was held on Christmas, 1927.

The congregation for the cathedral parish formed by the joining of existing Sacred Heart and St. Joseph parishes.

During the Depression funds were scarce to complete the undecorated interior of the cathedral. A fund drive was announced in 1937 by cathedral pastor Fr. Joseph Annabring to undertake this work. Despite modest funds, interior walls and ceiling were decorated and new pews, confessionals, and stained glass windows were added. 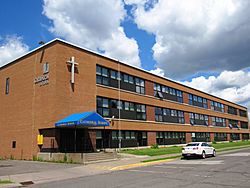 With continued growth, the cathedral congregation added a parish hall in 1946 and a rectory in 1948. The parish constructed a new school across the street from the cathedral in 1952 and a new convent in 1960.

The cathedral underwent a major renovation in 2003, with the church building closed for over a year while repairs to the exterior and renovations to the interior took place. Frescoes and an improved heating and air-conditioning system were added. The church re-opened in late 2004. The dedication ceremony for the renovated cathedral was in February 2005.

All content from Kiddle encyclopedia articles (including the article images and facts) can be freely used under Attribution-ShareAlike license, unless stated otherwise. Cite this article:
Cathedral of Christ the King (Superior, Wisconsin) Facts for Kids. Kiddle Encyclopedia.