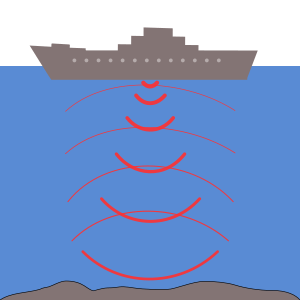 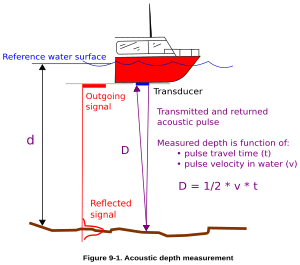 Echo sounding is a way out measure the depth of the water. This is done by sending out sound waves, and measuring how long it takes for the echo of the sound to come back. The speed of sound in the water is known, so the depth can be calculated. It is a kind of sonar. Note that the word sounding is used for all kinds of technologies, even though some do not use sound. Before echo sounding was used (in the early 20th century), sounding lines were lowered into the water to measure the depth.

All content from Kiddle encyclopedia articles (including the article images and facts) can be freely used under Attribution-ShareAlike license, unless stated otherwise. Cite this article:
Echo sounding Facts for Kids. Kiddle Encyclopedia.